ScreenAnarchy Top Kills: THE BEYOND 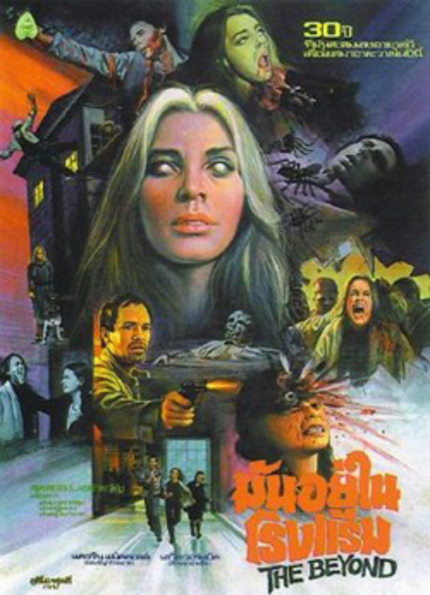 Lucio Fulci's magnum opus makes its second appearance in the Top Kills for a rather unorthodox scene.  Not every memorable kill is the result of man-on-man violence, nor even beast-on-man violence.  Sometimes it is just enough to get someone freaked out so that they are the victim of a terrible accident.

Such is the case in Lucio Fulci's The Beyond.  In this case, there is a man researching architectural texts in a library.  Alone.  Oh, and did I mention that they were on the very top shelf?  This of course, requires a very tall ladder to reach...

Lightning strikes!  The man is jolted from his task and loses his concentration, falling to the floor!  We see his head as it hits the ground and he appears to be dead, oh, if only it were only over for him.  Unfortunately, or fortunately for us, this particular Louisiana library is infested with hungry tarantulas.  On sticks.  Seriously.  This is awesome.  If he wasn't dead when he hit the ground, he sure ain't going anywhere now.

I could go on forever with just The Beyond, but this is only a taste of the madness in the film. If you haven't seen it yet, do it soon!  Arrow Video's The Beyond 30th anniversary edition should be on its way in the next few weeks, the film's first appearance on Blu-ray, and you know I'm all over it!