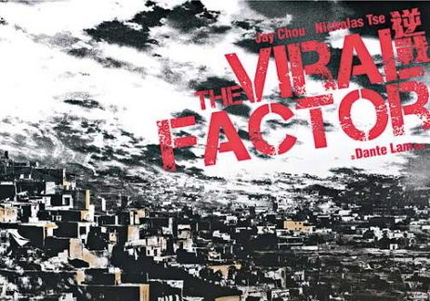 We are not ashamed to admit that here at ScreenAnarchy we've developed something of a man crush on Dante Lam. For a long time, the Hong Kong director of BEAST COPS and TWINS EFFECT was carving out a respectable, if erratic, career for himself, until suddenly emerging with a triumvirate of tough action thrillers that have catapulted him straight into the industry's top flight.  THE BEAST STALKER, FIRE OF CONSCIENCE and THE STOOL PIGEON are tough, stylish actioners that seem better suited to the golden era of the 80s, as they blend well-choreographed thrills with impressively developed stories and each grounded by a pair of top drawer performances. As details emerge of his latest project, it appears Lam is showing no signs of letting up and the promise of international intrigue on an even greater scale is on the cards.
THE VIRAL FACTOR casts Taiwanese pop superstar Jay Chou, most recently seen on our screens as the very best part of Michel Gondry's otherwise patchy THE GREEN HORNET, as the leader of an elite counter terrorism unit that travels from Hong Kong to the Middle East to trace the source of a deadly virus. The plot thickens when Chou's team is double-crossed by one of their own and his mission turns personal as he sets out for revenge.
Nic Tse, who just bagged a Best Actor award at last month's Hong Kong Film Awards for his last collaboration with Lam, THE STOOL PIGEON, here plays the lead villain in a cast that includes Andy On, Carl Ng and relative newcomer Bai Bing, among others. The film has been shooting in Jordan and moves to Malaysia next month before returning to Hong Kong in what is surely the director's most ambitious project to-date. We should hopefully see the film hit screens before the end of the year. Get ready to be happy.
Sign-In to Vote
Tweet 0 Submit

James, regarding the headline: I'm pretty sure many people would regard Jay Chou as a pox on humanity rather than Nicholas Tse...

Another director who could do a Lam is Billy Chung Siu-Hung who's made a bunch of severely underrated movies, if only he could get out of the claws of Wong Jing.

Check out Jay Chou in TRUE LEGEND coming out in the US this Friday (5/13/2011). The Facebook page has a ton of cool extras! http://www.facebook.com/TrueLegendFilm

"Get ready to be happy."
yes,I'm look forward to.