Review: THE VIRAL FACTOR May Be The Year's Best Asian Action Movie! 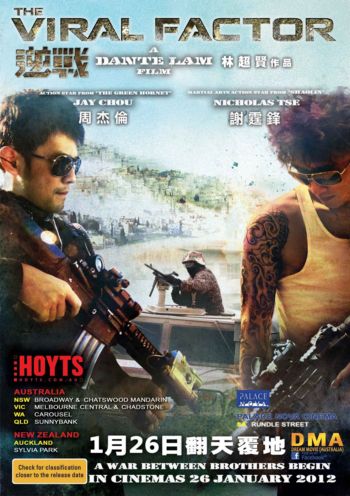 It's only January and there is already a serious contender for the best Asian action movie of 2012. That film is from HK and stars Asian superstar J.C.. But no, it's not Jackie Chan. It's Jay Chou who is in the film. Now please wait... before your anti-GREEN HORNET sentiment takes over and makes you stop reading, please take note that the film - THE VIRAL FACTOR - also stars Nicholas Tse (NEW POLICE STORY, SHAOLIN, BODYGUARDS AND ASSASSINS) and is directed by Hong Kong action maestro Dante Lam (BEAST COP, BEAST STALKER, STOOL PIGEON). Plus it is the kind of cool action films that Jackie Chan was making in the 90s.

Dante Lam is on a red-hot streak right now. His recent films BEAST STALKER and STOOL PIGEON have given him recognition both locally and abroad, as well as solid box office earnings across Asia. THE VIRAL FACTOR is the director's most expensive film to date, and may be the best chance he has yet to become more well known to Western audiences. While the reported production cost of US$17 million is modest by Hollywood standards, it is already a massive budget in Asia. And it is definitely money well spent (or as the film's investors would say, 'great value for money'), as the director has created a thrillingly explosive, visceral action-packed spectacle. There are literally non-stop chases, explosions, fist fights and gun battles from the start to the end of the film. These action sequences are simply top notch, whether it is by Hollywood or Asian standard.

The lead actors Nicholas Tse and Jay Chou both give solid performances. They not only carry out many of the daring stunts themselves, but also inject some emotions into the film through its dramatic scenes. The family drama actually turns out to be as interesting as the viral threat, helped by the brilliant support from Liu Kai-chi and Elaine Jin playing the parents. Nic Tse is also quite outstanding, and shows that he has really grown over the years into an incredibly good actor. With the increasing success of his films, those fans who miss his music (admittedly myself included - Nic has pretty much put his music career on hold) may sadly have to wait even longer to see and hear the talented musician perform again.

THE VIRAL FACTOR is not without flaws, however. There are plot holes as well as unlikely plotlines. Also, the motives of the villain Sean (played by Andy On) behind all these crimes are unclear, as he certainly comes across a lot more menacing, dangerous, intelligent and skilled than the man he calls boss. One does not get a lot of time to think through these things though, as the film moves forward with such a breakneck pace and the action scenes will certainly keep your mind occupied.

With THE VIRAL FACTOR, Dante Lam has added yet another awesome film to his already fantastic filmography, and it is a pleasure to see the way he handles a big budget blockbuster. His globetrotting adventure is epic in scale and impresses at multiple levels, and is certainly one of the best action movies of recent years to come from the once thriving Hong Kong film industry. Here's hoping it can bounce back into form like the Taiwanese film industry has in the past few years; and with directors like Dante Lam and works like THE VIRAL FACTOR, there is certainly a lot of hope on the horizon.

THE VIRAL FACTOR is distributed in Australia and New Zealand by Dream Movie. It is currently showing in Sydney, Canberra, Melbourne, Brisbane, Perth, Adelaide and Auckland.

Exclusive: HOW TO TALK WITH SPIRITS Concept Keyart