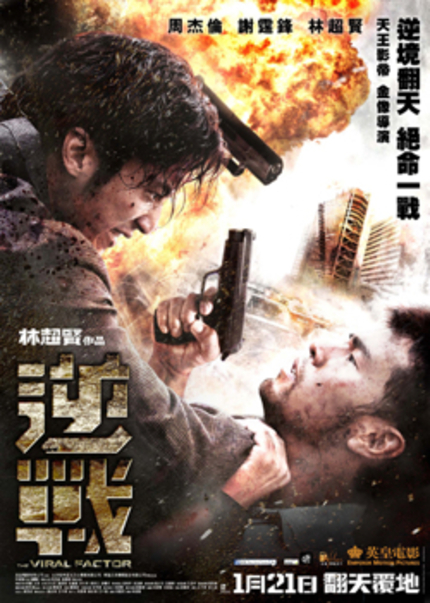 It's official: Hong Kong can no longer contain Dante Lam. The director has worked slavishly over the past decade, through a career of slapstick comedies and thankless pop star vehicles, to establish himself as the city's premier orchestrator of high-octane action. Lam's latest offering boasts his largest budget to-date, reported to be in excess of US$25 million, and explodes across Asia from Jordan to Beijing to the sweat-drenched streets of Kuala Lumpur.
Regular collaborator Nicolas Tse goes toe-to-toe with Taiwanese pop icon Jay Chou as estranged brothers, who find themselves on opposite sides of the law during an international terror alert involving a deadly virus. As they struggle to reconnect, not only with each other, but with the parents who separated them at a young age, the bullets, blood and balls of flame continue to keep them apart.
It is clear from the film's opening moments on the dusty streets of Jordan that plot will be taking a backseat to an almost relentless barrage of shootouts, chases and fistfights for close to all 120 minutes of the film's running time. What we are able to piece together through the smoke and the gunshots is that Jon Man (Jay Chou) is part of an Interpol Special Forces Unit charged with protecting a scientist responsible for creating a potentially lethal mutant virus. As they are about to whisk him off to safety, they are double-crossed by teammate Sean (Andy On), who kidnaps the scientist and leaves Jon with a bullet lodged in his brain.
An outbreak of the virus on a container ship leads the authorities to Malaysia, where career criminal Man Cheung (Nic Tse) escapes from his court hearing and has soon joined forces with Sean. Refusing medical attention, Jon tracks down his crippled father (Liu Kai Chi) for help, which in turn leads him to Cheung's daughter. It is only a matter of time before Cheung comes looking for his little girl and the two brothers come face to face for the first time in more than 20 years.
Dante Lam has steadily been honing his skills as an action auteur, and in the past five years has composed bold, visceral action sequences, interspersed with tough dramatic narratives, almost always built around the classic heroic bloodshed mould of two equal yet opposing antiheroes. THE VIRAL FACTOR proves to be no exception, with spectacular scenes of mayhem and destruction on a scale no Hong Kong movie has ever seen, coupled with the ultimate yin/yang stand-off between brothers, both literal and spiritual. Lam delivers military ambushes on the streets of Jordan, an aerial chase involving three helicopters weaving through the skyscrapers of downtown Kuala Lumpur, as well as tightly choreographed punch-ups and shootouts to rival anything Hollywood can offer.
As a result, the narrative does evaporate fairly early in proceedings, with the virus itself barely mentioned in the first hour of the film. Bai Bing's microbiologist seems to appear out of nowhere as and when the film requires her, which is also true of Jon's debilitating head wound. One minute he's punching ten bells out of his brother or jumping in and out of helicopters, the next he's writhing on the floor with a crippling migraine a hair's breadth from death's door.
Throughout the film characterisation is underdeveloped, with nobody outside of the two principles enjoying any kind of narrative arc. We are given backstory to explain why their parents split up and how their father lost his leg, but never more than is absolutely necessary to keep things moving forward. Characters also use a variety of languages throughout the film, again adding to the broad international feel (and appeal) of the film. Andy On's turncoat operative, for example, speaks almost entirely in English - and the film should prove an effective calling card to an overseas audience largely unaware of his skills - only to inexplicably revert to Mandarin for one of his many conversations with Jay Chou. Elsewhere a combination of Cantonese and Mandarin are spoken, but again there are unexplained instances when characters switch language for no good reason.
In the end none of this really matters, as Dante Lam clearly has little interest in anything other than cramming the screen with every cent of that $25 million. He didn't set out to make a delicate portrait of a fractured family in turmoil and he doesn't demand nuanced performances from his cast. Lam has proved with the likes of BEAST STALKER and THE STOOL PIGEON that he can lean towards weighty character dramas should the mood take him, but this time he's been given the big toys to play with and is free to make as much noise as possible.
THE VIRAL FACTOR is big, loud and couldn't care less whether you think it's clever or not (and it most certainly isn't). What it delivers is two hours of guns, explosions, car crashes, helicopter chases, running, jumping, screaming, shouting and enough bullets, squibs and blood bags to make John Woo hang his head in shame. There is nobody in Hong Kong making action movies that comes anywhere close to displaying the scope, ambition, or deliciously deranged vision of Dante Lam. And the best news of all is that he's only just beginning to hit his stride.
Sign-In to Vote
Tweet 0 Submit

Sir,
You have convince me.. Will see this on the big screen tomorrow in Houston....

I enjoyed Stool Pigeon. I will certainly be watching this at a Melbourne cinema soon.

definitely one for the big screen. Great to see China Lion are giving this one a big international release.

"There is nobody in Hong Kong making action movies that comes anywhere close to displaying the scope, ambition, or deliciously deranged vision of Dante Lam."

What about Benny Chan ? As far as scope and ambition are concerned at least, he's easily on a par with Lam.

Just saw it, you're right James.... The scope of this movie was huge!!! Good lord, who did the sound editing??? The sound was banging!!!