The brilliant REIGN OF ASSASSINS gets an Aussie release! 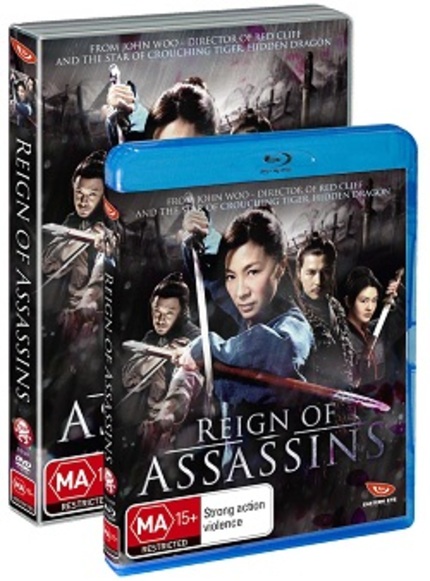 Madman are going to release Reign of Assassins on DVD and Bluray on the 22nd of June. This is great news as Reign of Assassins is one of my favorite films of last year and has definitely not received the undue attention it deserves in Australia!

In ancient China, the assassin known as "Drizzle" is a prominent member of the deadly and ruthless Dark Stone Gang. But after a life of theft and murder, she decides to atone for her ways and leave the gang forever, doublecrossing them during a heist. "Drizzle" soon undergoes a drastic procedure to alter her appearance and changes her name to Jing (played by CROUCHING TIGER, HIDDEN DRAGON's Michelle Yeoh) to start a new life for herself in the capital.

Directed (sort of) by legendary filmmaker, John Woo (THE KILLER, HARD BOILED) and the talented (more so) Chao Bin-Su (SILK) who brings a new vision from his Taiwanese roots to this genre, REIGN OF ASSASSINS is a stylish and twisted adventure that revisits the 'Wuxia' swordplay finesse - made famous in CROUCHING TIGER, HIDDEN DRAGON among many other interesting visual and dramatic flourishes, don't miss this one!