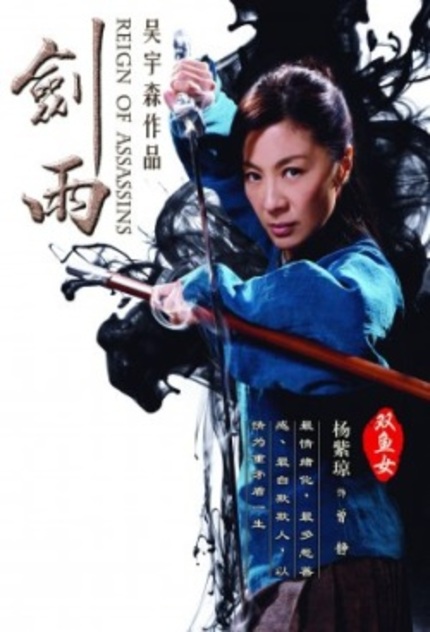 I admit, I'm quite partial to big-budget martial arts epics. I love films like 14 Blades, The Banquet, Hero and True Legend, now it's time to promote John Woo's latest entry in the genre. Backing director Chao-bin Su, Woo delivers a prime example of wuxia wizardry with a serious injection of old-fashioned martial arts genre fun. The result is a nice blend of old and modern which looks stunning and doesn't leave you any chance to become bored.

Opinions tend to differ, but personally I feel it's been years since John Woo managed to direct a truly satisfying film. His Chi Bi project was decent enough but didn't hold up against the competition and his late Hollywood work just isn't good enough to compare to the the highs in his oeuvre. A little ironic as Woo's name seems mostly attached to this film for the guidance he gave Chai-bin (and for obvious commercial reasons of course). Chao-bin is credited as both writer and prime director for Reign of Assassins, so it's really his film.

Plot-wise Reign of Assassins reminds me a lot of the martial arts productions from the early 90s, a golden period for Hong Kong cinema and its martial arts films. The film follows Zeng Jing, an assassin trying to retire from the world of martial arts. Complicating her retirement is the theft of an important artifact, which sets a crew of angry adversaries on her tail.

Zeng Jing is skilled enough to escape them and retires after signing up for cosmetic surgery to hide her old face. She marries and seems to be living a happy life, until fate comes to collect her dues. From that point, it's all battles and twists that make up the bulk of this film. Told in a somewhat atypical chronological order, Reign Of Assassins has a stronger and more developed plot than most peers, most probably because Chao-bin does a great job of handling both script and direction at the same time.

Woo and Su turned Reign of Assassins into a true visual spectacle. The cinematography is stunning, using lots of dark yet powerful colors, trusting the majestic camera work to do the rest. All the fight scenes are a joy to behold and even the more toned-down and dramatic scenes are exquisitely photographed. It makes films like these a lot easier to watch. From the opening to the very last scene, there isn't a boring or dull scene to be found.

The soundtrack is of lower quality, but suffices for a film like this. Sometimes a little over-dramatic, though most of it is pretty bearable. Simple re-workings of classic themes that do fit the mood of the film, but don't go far in defining its atmosphere. Luckily the visuals are strong enough to counter this, otherwise it would've weighed a lot more on the overall feel of the film.

As for acting, I couldn't help but feel a little awed by Michelle Yeoh's performance. She's almost 50 but still kicks serious ass on screen. Her performance is elegant, powerful and stoic, but her moves are still fluent and agile. She easily carries the film as female hero, not many people in Hong Kong (or even outside of Hong Kong) can do that. The rest of the cast is pretty good also, but they are easily overshadowed by Yeoh's presence.

Reign Of Assassins is a pretty good continuation of the martial arts genre. It's not often that female characters get a lead in these type of films, Yeoh demonstrates it's not because they lack the (screen)fighting skills. The only post-80s film featuring female leads I can actively remember is The Heroic Trio, which incidentally also features Yeoh in one of the key roles. I for one think the lack of testosterone is a welcome change of scenery.

The biggest problem is that Reign of Assassins has some stellar competition amongst its peers. It can't battle with the best, but still manages to impress on most levels. It's no new Hero or The Banquet, it simply doesn't push the boundaries as much like these films could, but apart from that (and the mediocre soundtrack) there really isn't much to complain about.

Chao-bin Su and John Woo delivered a great film, filled with awesome action scenes and above-par dramatic filler that stands its ground amongst all the other martial arts films coming from Hong Kong. If you're looking for a quality martial arts epic, look no further because this film has everything to quench your thirst. As long as you don't expect to be totally blown away by, there isn't much that will keep you from enjoying Reign of Assassins.