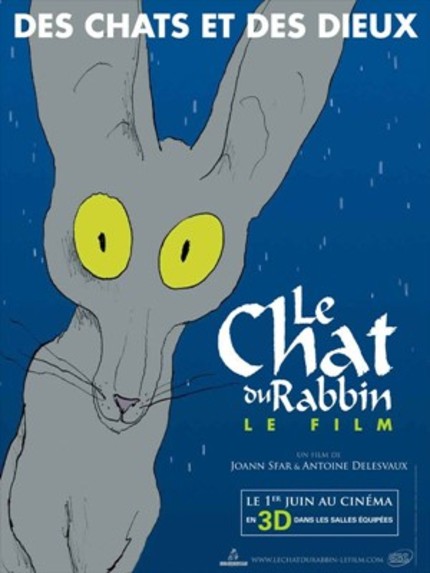 Joann Sfar's popular graphic novels about a rabbi and his talking cat - published in seventeen languages around the world - come to the big screen in June thanks to an animated feature film directed by Sfar himself in cooperation with Antoine Delesvaux.

Algiers, 1920s. Rabbi Sfar has more than one problem. His beautiful daughter is becoming a teenager and above all, his parrot-killing cat has just started talking!

The delivery of a box from Russia further complicates things when a painter is discovered inside, more dead than alive. He is on a quest for a hidden tribe and its mythical city in Africa. Convinced that the city exists, he sets off on an incredible adventure, taking with him the Rabbi, his cat, a wise old Arab Sheikh and an eccentric Russian millionaire.

Created as old style hand drawn cel animation, the film will be shown in 3D on French release and you can get a look at the first trailer below. The level of craftsmanship here is very strong and the energy level is high. It's charming stuff.
Tweet Post Submit