FAT GIRL on BLURAY from THE CRITERION COLLECTION 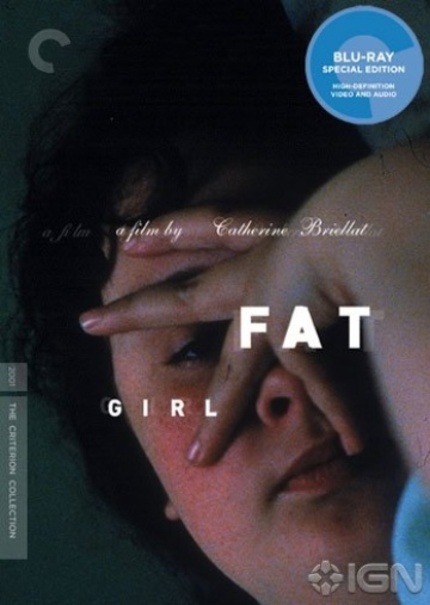 Anais (Anais Reboux) is 12 years old and fat and cynical beyond her years. Her 15 year old and outwardly pretty sister, Elena (Roxane Mesquida), is full of empty headed notions about sex and love. Their life together is complex in the way that most sisters is. They bicker constantly, sometimes viciously but can rebound into moments of startling honesty and affection. When Elena casually seeks out and slowly gives herself to a far older man (Libero De Rienzo) during their family vacation, Anais becomes a mute increasingly embittered witness to their flirtations and finally, their painful ultimately heartbreaking consummation. Finally, on a tense car ride home something horrible happens bringing the narrative full circle.

What sounds like simple, well trod territory for a coming of age story is in reality merely the skeleton of a far more complex cinematic work. Whether viewers will want to go where director Catherine Breillat takes them, or understand how they got there, will depend on their ability to absorb some explicit teen sexuality and an ending that may seem every bit as contrived as it does powerful. But either way Breillat is obviously up to more than provoking her audience. It is clear at the outset that we are to feel the emotional  and psychological danger of the girls respective situations and to care for them.  Breillat also demonstrates an interest in simple honestly conveyed emotion, seldom allowing her actors to decorate their actions or dialogue unnecessarily.

Anais performance in the film is extraordinary. She manages to convey vulnerability and strength simultaneously and though viewers will certainly be moved for her they will likely be caught off-guard by stony hearted determination to survive the indignities forced on her by her family and fate. We are constantly reminded of Anais' search for identity. From her exploration of her pudgy physique in the mirror to her grim determination to embrace the film's final degradation as an opportunity for some sort of undefined freedom.

Initially banned in some places because of explicit sexuality involving teens it should be noted that all of the actors were either of age or utilizing physical prosthetics. Like Gaspar Noe and other filmmakers to whom she's been compared, Breillat still produces work under this stigma. Perhaps this is somewhat deserved. It isn't that her work is troubling but that it seems somewhat ambivalent in the way that it makes  such young actors available to the private abuse of others.Of course the film judges the actions of Elena's lover most harshly. He is a complete cad. But in this Breillat comes dangerously close to preaching out of two sides of her mouth. Decrying the loss of innocense even as she showcases it in a manner that some would argue exploits her young child actors.

The film screams for a commentary from someone like a child psychologist.  But other than that nothing in the way of extras is missing her.  You get a gorgeous looking High-definition digital restoration (with DTS-HD Master Audio soundtrack) , Behind-the-scenes footage from the making of Fat Girl, Two interviews with director Catherine Breillat, one conducted the night after the film's world premiere at the 2001 Berlin Film Festival, the other a look back at the film's production and alternate ending. Also included are French and US theatrical trailers and a booklet featuring an essay by film scholar Ginette Vincendeau, a 2001 interview with Breillat, and a piece by Breillat on the origin and meaning of the title.

Do you feel this content is inappropriate or infringes upon your rights? Click here to report it, or see our DMCA policy.
Catherine BreillatAnaïs RebouxRoxane MesquidaLibero De RienzoArsinée KhanjianDrama