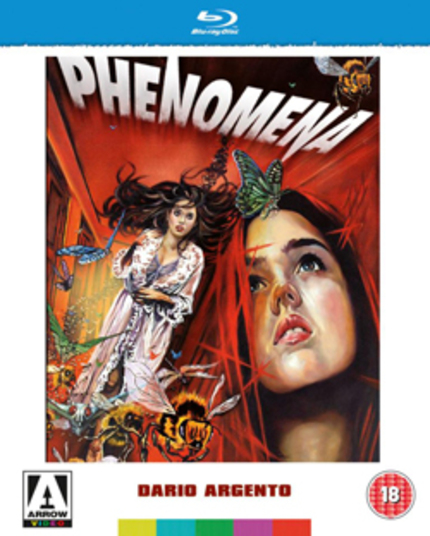 James Dennis reviewed this disc a couple of months ago, but he only had a screener disc, so rather than rehashing everything, I'm going to give my impressions on the film and the additional materials to which James didn't have access.

Phenomena is one of the stranger films in Dario Argento's oeuvre.  It takes place in a private girls' school in Switzerland and concerns an American girl (Jennifer Connelly in her first starring role) who is the daughter of a famous actor and who also has a particular relationship with insects.  The school has been plagued (no pun intended) by a recent spate of murders.  That's where a forensic entomologist, Dr. MacGregor, played by the legendary Donald Pleasance (Halloween, You Only Live Twice) comes into play.  He is able to determine the age of decayed bodies by the rate at which insects infest and reproduce within the corpses.  Oh, and he's a paraplegic with a chimp assistant.

Everything about this film is ridiculous.  Every five minutes some new plot twist arises that makes the jaw drop.  There is absolutely no attempt to keep this film rooted in the real world, which is not the case with Argento's earlier gialli.  Those films, while melodramatic and overtly violent, were, for the most part, realistic enough.  Phenomena is not interested in that at all, it is all about spectacle, and it does it well.

All of Argento's mad leaps into ephemera allow all parties both on and off screen to do some spectacular things.  Sergio Stivaletti's SFX work in the film is phenomenal.  Dr. MacGregor's work as a forensic entomologist allows Stivaletti the opportunity to create fantastic rotting heads with festering bugs, probably my favorite practical effect in the entire film.  In addition, as visual effects supervisor, Luigi Cozzi (Star Crash, Hercules) creates some great effects of the insects swarming at the telepathic behest of Ms. Corvino.  Daria Nicolodi turns in a wonderful performance as the not-quite-what-she-seems teacher at the school.  Another major character in the film is the music which was, for the first time, not completely scored by one artist.  Sure, Claudio Simonetti of Goblin does most of the work, but there are these really strange interludes with heavy metal songs.  The driving metal music always comes on when the characters are not really doing much of anything, it is very strange, it isn't used for chase scenes or anything.  I think one is when Jennifer Connelly is walking out among some bushes, serenely following a firefly and over it you have this screeching metal music.  Really weird stuff, but fun!

Phenomena is a lot of fun, and every turn the plot takes gets more and more interesting.  You never know what is going to happen next, and I like that!  I'm not sure if I was ever scared, but I was damn sure entertained.

Arrow Video has brought Phenomena to Blu-ray for the first time in the world, and it looks good.  The video is noticeably more clear, the colors better blended, and the detail more apparent than in any home video release I can find.  Phenomena has never looked this good, and I'm not sure of any other releases coming the world to challenge this one any time soon.  The sound is a little bit more complicated.  Arrow Video have provided both the original English LPCM 2.0 track and the Italian LPCM 2.0 track.  These are funny.  The English track has a few seconds here and there of Italian dialogue where the English dub wasn't recorded.  That isn't a problem, you get used to it.  There are a couple of split second audio dropouts that I found during the film, never more than half a second, but odd to hear.  Another weird thing is that while the dialogue on the English version of the film sounds better and better matches the mouths flapping on screen, the music sounds noticeably better on the Italian track.  I assume that is how the masters sound, I can't be certain, but it was something I was confounded about.

The extras on the disc are great!  There are only three disc based extras, but they are definitely worthwhile.  The first is a 50 minute making-of documentary with interviews from most of the living participants including, Argento, Daria Nicolodi, Claudio Simonetti, and Sergio Stivaletti.  Jennifer Connelly is conspicuous by her absence, but that isn't' surprising.  This is very thorough and in-depth and really helps put some background to the film.  Also included are two shorter featurettes, one involving Stivaletti which consists of two Q&A's from screenings of Phenomena, and the other with Simonetti regarding his work on the film and its success.  Simonetti also candidly discusses his dislike for using contemporary rock music in films, and how he'd much rather have scored the whole thing.

Also included in the package are the customary two-sided poster and four-paneled reversible cover art with windowed slip case.  The final piece of the package is a neat essay on the film by Profundo Argento writer, Alan Jones, who provided a commentary for Arrow Video's Deep Red.  There are some interesting tidbits in the essay, and it is certainly worth a few minutes reading.

I highly recommend this package.  Arrow Video have done a wonderful job with the film and the bonus materials and their attention to packaging detail can't be beat!