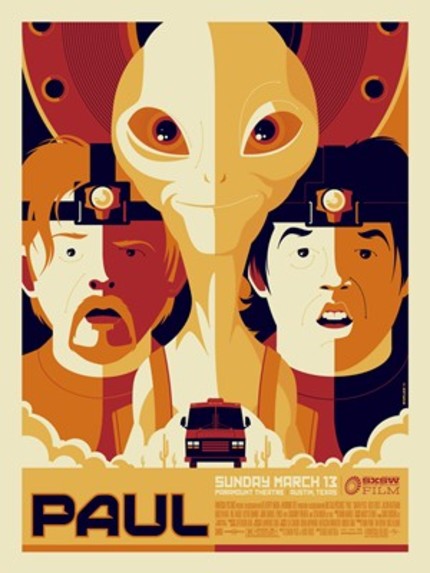 "Don't judge a book by its cover" is one of the most pedestrian -- but most helpful -- of all the great proverbs, and its lesson holds doubly true when it comes to movie advertising. If you judged the silly new science fiction comedy Paul by its posters, trailers, and TV spots, you'd probably walk in expecting a generic little kid's flick -- and you'd walk away stunned and probably a little bemused, because Paul is actually a joyously foul-mouthed (yet oddly sweet-natured) road movie about two lovable oafs who befriend a wise-ass alien and then head off to help their interstellar buddy hitch a ride home.

If any of that sounds patently familiar (or if it's been plucked straight out of E.T., Starman, or (gasp) Mac & Me), that's kind of the point: while Greg Mottola's Paul will most certainly work for general audiences looking for a chuckle, it will appeal most strongly to those who lived through the finest sci-fi flicks of the 1980s.

In other words, while Paul is absolutely stuffed with movie-geek in-jokes (both subtle and obvious), the screenwriters' affection for specific genre fare never gets in the way of a simple little road farce. Those writers, and the stars, are the consistently amiable Simon Pegg and Nick Frost, whom the astute movie fans know as "those awesome British nerds from Spaced, Shaun of the Dead, and Hot Fuzz" -- and if Paul lacks the pointed and aggressively funny style of the duo's previous work, that's fine because their turns here as slightly dim-witted but charming lunkheads works so darn well. Pegg and Frost may be working with lighter material here, but their on-screen chemistry continues to shine.

The cross-country trek to bring Paul (voiced goofily and enjoyably by Seth Rogen) back to a rendezvous point features all the things we enjoy about road movies: small bits of scrapes, escapes, chases, and violence; several colorful nemeses to deal with; a few new friends that are acquired as the Winnebago barrels along, strong work from character players (like Jason Bateman, Blythe Danner, Bill Hader, and the innately hilarious Kristen Wiig); and a feel-good finale that feels like a mix between Close Encounters, Explorers, and Short Circuit. It's pure "fanboy / fangirl" nonsense from stem to stern, but the key players all seem to be approaching their goofball comedy with a fair deal of matinee-love and simple affection.

Paul may not be the laugh riot that it could have been, and only time will tell if it holds up like the earlier Pegg/Frost flicks do, but the movie's a whole lot sillier, raunchier, and sweeter than its advertising suggests.