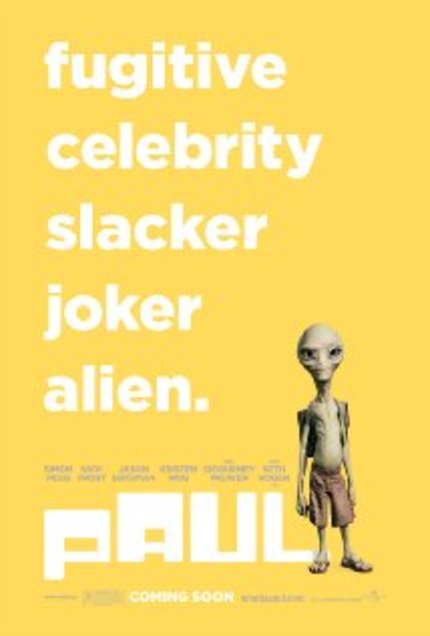 "Paul", the latest from the team of writer/actors Simon Pegg and Nick Frost, is a hilarious geek-gasm of a movie, and nothing more. It is the third film for the Pegg/Frost creative pairing ("Shaun of the Dead", "Hot Fuzz"), although the previous third member of the party, director Edgar Wright, is this time swapped out for the also-respectable Greg Mottola ("Superbad", "Adventureland"). Mottola clicks pretty well with the Pegg/Frost rhythm, although when compared to their other films I've cited, "Paul" is the least of their work to date.

We begin with a flashback to sixty-plus years ago, when a visiting UFO accidentally smashed a little girl's pet dog named Paul. Cut to today, when travelling English buddies Graeme and Clive are about to arrive upon that most holy of all modern geek destinations: the massive, annual San Diego Comic-Con. There, amid the sea of stormtroopers and slave Leias, they meet the brashly enigmatic sci-fi author Adam Shadowchild - a character who is referenced in great detail for the remainder of the film, but to no comedic avail other than the fact that Jeffery Tambor is clearly having a fun time playing him. From there, they hop into a rented RV, and take to the road in an effort to check out all the legendary UFO hot spots of the American southwest.

Then they meet Paul. Paul, named after the poor smashed puppy dog of sixty-plus years ago, is a child-sized space alien who's been living in and recently escaped from a U.S. government holding facility. Freewheeling in his irreverent charm, Paul, a well-realized computer generated creature voiced by Seth Rogen, steals the movie from here on out. I suppose the argument could be made that the movie was his all along, considering the title and whatnot. But when it comes to late arrivals in the story begging a major focus shift, Paul is nine-year-old Anakin Skywalker to Graeme and Clive's Qui-Gon and Obi-Wan.

For those enamored with American geek cinema (I count myself as an aficionado), "Paul" will be a good time at the movies. It's a patchwork quilt of callbacks to "Star Wars", "Star Trek", "Aliens", "E.T.", "Close Encounters of the Third Kind" and "Easy Rider" (of all things). It's funny, but it gravely lacks the power and appeal of any of those films. The main problem is the meandering screenplay that never quite finds its much-needed heart, and is never quite sure who gets a character arc and who doesn't. Viewers who are simply in search of a gag-fest where they can laugh and play a few healthy rounds of name-that-movie-reference will not be disappointed. Both visually and tonally, it evokes Kevin Smith's latter-day Askewinverse films. But like those films, it's often so busy packing in the references that it takes on certain detached flatness.

Kristen Wiig joins the caravan as a clichéd small-minded Christian fundamentalist whose reality is shattered upon meeting the alien Paul. Her primary self-granted newfound freedom from the shackles of faith-based legalism? Swearing up a storm of improperly used curse words. For the film's many attempts at running gags, this is far and away the most successful. As an onscreen presence and comedic force of nature, Wiig in turn steals the movie away from Paul. Jason Bateman, Bill Hader and Joe Lo Truglio, playing inept lawmen, do their best to steal the movie yet again, but only Bateman doesn't chronically overstay his welcome. Jane Lynch and Blythe Danner also have their moments in the desert sun.

"Paul", being that it's about a sawed-off dope-smoking foul-mouthed spaceman who tends to lose his shorts, opts to have some fun with it's general dismissal of Judeo- Christian beliefs. More to the point, ignorant, inconsiderate Christians fall into its sights on more than one occasion. In a film such as this, one that sets out for irreverent laughs; this is more or less to be expected. It's like shooting fish in a barrel - so irresistible that a professing catholic like Kevin Smith often can't hold back from doing it in his own comedies. So, with that in mind, it's interesting that despite Paul's (both the film's and the character's) latent antagonism of what organized American Christianity unfortunately often looks and sounds like, the alien's own story arc is very much that of E.T., who himself is an archetypal Christ figure of the cinema if there ever was one.

The filmmakers clearly were interested in inverting the classical norm of friendly movie aliens, but their attempt to do that while also embracing the films of the said classical norm never really settles well. It doesn't help that in doing so, screenwriters Pegg and Frost eventually render themselves merely along for the ride. There have been better overall cinematic love letters to nerdiness and fandom over the years, but few are as funny as "Paul". Just don't expect the multi-level cleverness that so wonderfully permeated "Shaun of the Dead" and "Hot Fuzz". So, that said, and with all due respect to director Mottola, here's hoping that Edgar Wright will return to the Pegg/Frost fold for their next geeky excursion, wherever that may take them.