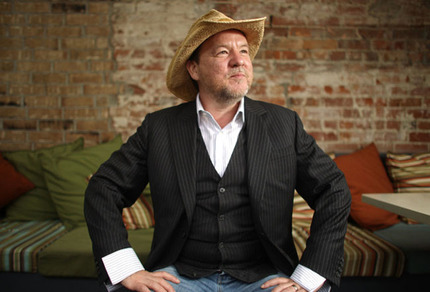 [Sad news from organizers: Though the rest of the night will be rolling as planned Bruce McDonald himself has been roped into an unavoidable obligation and has had to cancel out his appearance.]

I just bumped into Bruce McDonald who had kids in tow for ScreenAnarchy's Back to The 80s presentation of Dark Crystal, but I wasn't aware at that moment, that he is showcasing one of his four 2010 feature films (stop for a second, you read that right:  Four!) at UofT's CINSSU "An Evening With..." series on March 9th (That is next Wednesday, folks).
The film they are screening the romance/concert with Canadian indie-superband Broken Social Scene, This Movie Is Broken (review is in the archives below).  There will be an intro and a Q&A with Bruce, followed by an intimate post-film refresher (free food, cash bar) in the adjacent Cafe.  Sounds peachy!  Did I mention the screening was also FREE.  Peachier!
Now that it is in the can and has played at least one festival, maybe McDonald will spill the beans on when we can expect a Toronto Screening of Hard Core Logo 2, or when he will get back together with Tony Burgess to make Pontypool Changes, and Pontypool Changes Everything.
Sign-In to Vote
Tweet 0 Submit