Feist, Metric and Broken Social Scene In The Trailer For Bruce McDonald's THIS MOVIE IS BROKEN 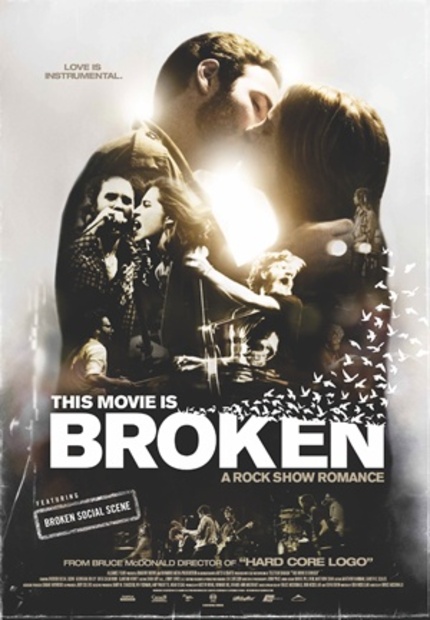 Bruce McDonald's This Movie Is Broken is, in essence, the perfect convergence of nearly all aspects of Toronto's independent arts scene. There is McDonald himself, of course, the helmer of Hardcore Logo, The Tracy Fragments and Pontypool arguably the most influential independent film maker in the English speaking part of Canada. Then there is writer Don McKellar, himself a talented director and actor, lately best known for his massive Broadway success as the author of The Drowsy Chaperone, a musical originally written and performed as a wedding present in lieu of a physical gift that has since gone on to win multiple Tony awards. And then there is the musical component of this concert doc / romantic drama hybrid. Appearing on stage: Feist, Emily Haines from Metric, Amy Millan from Stars and the titular Broken Social Scene. The gang's all here, apparently.

Unbelievable! Bruno (Greg Calderone) wakes up in bed next to Caroline (Georgina Reilly), his long time crush. But tomorrow she's off for school in France, and maybe she only granted this miracle as a parting gift for her long time friend. So tonight -- tonight is Bruno's last chance. And tonight, as it happens, Broken Social Scene, her favourite band, is throwing a big outdoor bash. Maybe if Bruno, with the help of his best pal Blake (Kerr Hewitt), can score tickets and give Caroline a night to remember, he can keep this miracle alive.

Following its premiere at the SXSW Film Festival, This Movie Is Broken receives its Canadian release next month and we've got your first look at the theatrical trailer. Take a look below.

Wonderful to see Georgina Reilly (who was also excellent in Bruce McDonald's Pontypool) be so luminous here! The selling point, though, is certainly the music. I am quite excited to see this when it plays here in June.

This is going to be a LOT better than Michael Winterbottom's "9 Songs."

But WHY did he have to cast the most annoying guy from those Rogers cell phone commercials as the lead?

Bah, whatever. I'm there!