SXSW 2010: THIS MOVIE IS BROKEN Review 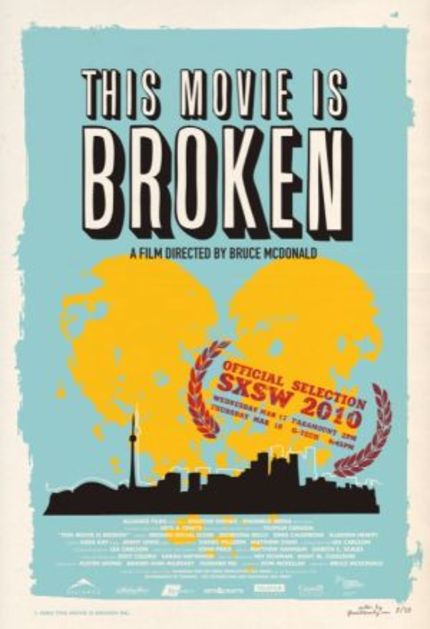 I feel like such a musically ignorant cuss, but I'd never really heard of Broken Social Scene before watching the latest movie by Bruce McDonald (Pontypool, Hard Core Logo). And now I'm a fan, both of Broken Social Scene and of the film, which takes place in and around a free concert by the group in Toronto last summer.
This Movie is Broken captures the warmth and vitality of a percolating musical performance in the great outdoors, topped by the champagne buzz of an affair reaching a turning point. The script by Don McKellar fabricates a longtime relationship between Bruno (Greg Calderone) and Caroline (Georgina Reilly). We meet them as they're waking up in bed together on a makeshift rooftop bed. Their friendship stretches back to childhood; for Bruno, it is the realization of a lifelong dream to have sex with Caroline.
Looming over the next step in their relationship, however, is a huge geographical challenge. Caroline lives in Paris, and will be leaving Toronto the next day. That gives Bruno less than 24 hours to work out a new romantic quandry. (Caroline has already told him it was 'just sex,' but Bruno isn't discouraged in the least.) Best friend Blake (Kerr Hewitt) opens his big mouth and tells Caroline that Bruno can get them backstage passes to see Broken Social Scene that night, which sounds like the best, most romantic way to spend the evening.
The entire film feels post-coital, basking in the afterglow of an intimate night. The story glides gently from concert footage to romantic gestures to friendship talk, never feeling forced or contrived as it moves back and forth in time over the course of the day. The fictional overlay feeds off the energy of the concert; while neither comments directly on the other, they both feel part of the same organic whole, two different strands of the same narrative plot.
In the Q&A after the world premiere screening at the Paramount Theater, director McDonald claimed the film was completed only 12 hours before the world premiere. (I think he was joking.) In response to an audience member's question, he said he had not yet seen Michael Winterbottom's Nine Songs, but knew about the intent of that film and its mixture of concert footage and explicit sex. He said he wanted to make something a little different. 'That's a fuck film. We wanted to make a romance film.'
This Movie is Broken is romantic and lovely, gently evoking the passion of kissing someone you love on a sprightly, memorable summer evening. Even if you're not a fan of Broken Social Scene.
Sign-In to Vote
Tweet 0 Submit

Don McKeller and BruceMcDonald Declare THIS MOVIE IS BROKEN

Love the Winterbottom summation at the bottom. 9 Songs is one of that directors few out-and-out failures.

I'm sure This Movie is Broken will be playing in Toronto soon enough and your review makes me very, very happy!

I'm seeing them in Sydney next month, i can't wait. Hopefully this film will get distribution here, i loved Pontypool!

Frontières 2020: Call for Submissions to Platform in Cannes And International Co-Pro Market at Fantasia

Now Streaming: THE RISING OF THE SHIELD HERO, Go Behind the Scenes in New Video

Now Streaming: THE RISING OF THE SHIELD HERO, Go Behind the Scenes in New Video