Blu-ray Review: THE MAN FROM NOWHERE 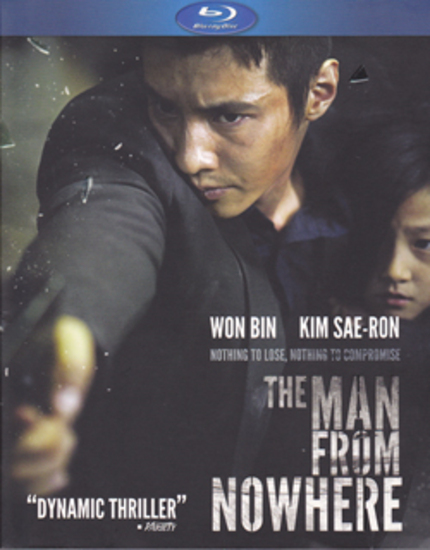 If there is one thing Koreans know how to do well, it is the revenge thriller.  Most of their major international breakthrough films in the last ten years have been revenge themed: Oldboy, A Bittersweet Life, Lady Vengeance, even Mother and The Host in a way.  So, when a new revenge film comes out in Korea, it is bound to be eagerly awaited by Western consumers, and The Man From Nowhere is no exception.  However, does it live up to the high bar for quality set by its predecessors?  That is open for debate.  I loved it, and the opinions here at ScreenAnarchy have been mostly glowing.  The film packs a punch, that is for sure, and there is enough brutal action in this film to satisfy almost any fan.  How does the Blu-ray stack up?  Read on...

The Man From Nowhere doesn't really have much new up its sleeve.  Everything in the film has been done before, but that doesn't mean it isn't worth watching, and worth enjoying.  The film is the story of Cha Tae-shik, a pawn shop proprietor/ex-secret super agent, who lives a solitary life after a personal tragedy and tries very hard not to become involved in the lives of others.  Unfortunately for him, his solitude piques the curiosity of his neighbor, a young girl named So-mi who often visits his business and sometimes begs her way inside for a meal when her mother is absent.  Gradually, Tae-shik develops and affection for the girl, and when the girl's mother crosses some local drug lords, the bad guys take revenge on the mom and the girl.  Needless to say, this doesn't sit well with Cha Tae-shik.

The rest of the film follows Tae-shik as he attempts to get So-mi back from the drug dealers.  Along the way the story gets more and more convoluted and the bad guys get nastier and nastier.  It turns out that drug dealing is the least of their crimes, as this film seeks to paint a pair of evil brothers in the worst light possible.  Think of a vice, they are involved, and they are involved in a couple that probably don't come to mind right away.  Nasty dudes, for sure.  Of course, men of power always have a buffer of less important men between themselves and real danger, and this provides Won Bin, as Tae-shik, the opportunity to show some real fighting chops on his way to revenge.  He acquits himself well, and in typically Korean fashion, the fights are brutal, far more street fight than graceful.

The Man From Nowhere spares no expense in attempting to wring sympathy from the viewer, from its use of children to strategic and tragic flashbacks.  As cheesy as it may sound, it works.  The film is in the mold of the classic Hong Kong heroic bloodshed films going back fifty years, and this is a fine addition to the line.  A few years ago Kim Jee-woon added A Bittersweet Life to the collection, and while there are similarities between the two, The Man From Nowhere is a different enough film to warrant seeking out.  Where Kim's film was tragic, it was also highly stylized, and the cinematography was beautiful for each and every shot; The Man From Nowhere favors brutal realism in its settings, if not in its plot.  The film is dirty and gritty, much of the run-time is spent in the dark, with the proceedings bathed in blue light.

The action is less choreographed looking than in A Bittersweet Life, there are several very painful looking fight sequences, but it is the final battle with the kingpin's top bodyguard that leaves a mark.  It is the most brutal knife fight I've ever seen on film, you can tell that the purpose is to exact revenge one person at a time, not just on the boss, but on everyone that answers to him, and Tae-shik does this by unloading what seems to be a never-ending supply of rage into each henchman.  Bloodied, but never beaten, Tae-shik will not be stopped, nor even slowed in his march.

The Man From Nowhere is an excellent film.  Every piece of the puzzle fits, from the actors, to the script, and especially the action.  Despite its being derivative, it manages to rejigger the pieces into something new and worthwhile, and an enjoyable film experience.  As with all Korean films, it could stand to be about twenty minutes shorter.  I'm not saying I know where those twenty minutes are, but it feels just the slightest bit overlong.  I highly recommend the film for anyone who is a fan of revenge/heroic bloodshed films, as they don't get much better than this.

Well Go USA has provided an excellent presentation of The Man From Nowhere on Blu-ray.  Dark films tend to be difficult to render on home video in general, but this one looks great.  The daytime sequences are equally beautiful, with detail popping out from every nook and cranny of the frame.  There is a great amount of depth and detail, and when there are bright colors on the screen, which is infrequent, they are also marvelous to look at.  Equally accurate is the soundtrack.  Well Go have provided Korean and English language tracks in both DTS-HD 5.1 and Stereo.  The DTS-HD tracks are well separated and accurate.  Dialogue is clear and easy to understand, and there are no defects that I can hear at all.

Well Go have provided a few extra features to sweeten the pot.  The first, and most substantial is a behind the scenes featurette that starts out as simple backstage footage of some stunts and action setpieces, and moves onto brief profiles of some of the cast and crew.  There is no big dissection of the film, but it is interesting to see how some of the film's many stunts were accomplished.  Also on the disc you'll find the original trailer and an action highlight reel, showing about five minutes of action highlights from the film.

The Man From Nowhere deserved a great Blu-ray release, and to my eyes, Well Go has stepped up to the plate admirably.  I highly recommend this package.

The Man From Nowhere will be available on Region-free on Blu-ray and DVD March 8th.

Pre-order Well Go USA's The Man From Nowhere on Blu-ray at Amazon.

Pre-order Well Go USA's The Man From Nowhere on DVD at Amazon.

Visit The Man From Nowhere on Facebook for updates.