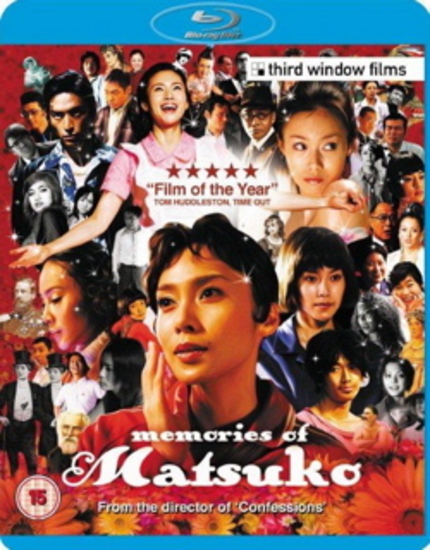 This one took it's sweet time getting to me from the UK, but it was definitely worth the wait.  Tetsuya Nakashima's beautiful 2006 film, Memories of Matsuko, has been available on UK DVD from Third Window for a while, but just recently made it international debut on Blu-ray, and the results are fabulous!

As the film opens, listless layabout Sho Kawajiri gets a visit from his father telling him that his aunt Matsuko, who he's never met, has died and Sho is in charge of cleaning out her apartment.  After dutifully making the trek to Matsuko's home, Sho starts uncovering tidbits about her life with the help of a punk rocker who lives next door.  What he uncovers paints a picture of an eternally optimistic, but beaten down woman, who wants nothing more than to be loved and cared for, and to offer her love in return.  Matsuko's life is a roller coaster, with each low point getting increasingly lower, until she ultimately ends up six feet under.  The highs are marvelous, and her euphoria often masks her desperation to hold on to that feeling at all costs.

The beauty of Nakashima's work here is not so much the story, which is heart wrenching by anyone's scale, but the way in which it is presented.  Those familiar with his previous film, Kamikaze Girls, will be somewhat prepared for Nakashima's gift for visual flourish, but Memories of Matsuko takes that to new heights.  We, the viewers, can feel Matsuko's emotional tension through Nakashima's visual treatment of the frame.  When Matsuko is happy, there are beautiful songs, cartoon sparrows, flowers, and colors so bright they almost hurt your eyes.  However, when Matsuko is sad, the world turns very, very dark, and grimy, the shine literally comes off.  You can always tell where Matsuko is by what is going on around her, you don't necessarily even need the dialogue to tell.

What Nakashima has created is unique, and it shouldn't be as effective as it is, but it manages.  If you were to tell the average viewer that they were going to watch a film, that it was a musical tragedy, with cartoons, you'd probably get a lot of people passing on the opportunity.  When I revisited the film, I found myself reminded of just how affecting it was, I was ill-prepared for it.  I've seen it before, and enjoyed it, but at the end, my heart was crushed into dust, perhaps the levity makes the pain worse when it inevitably comes, I'm not sure.

The way I would describe Memories of Matsuko to my friends is that is it like listening to every Smiths song ever written, all in a row.  Nakashima has the same gift of taking a sugary sweet surrounding and layering in tragedy below the surface.  It is like the first time you listened to the lyrics of How Soon Is Now?, all of that joy from listening to the music is transformed and somehow the tragedy made more painful.  It is a rare gift, but one that is beautiful when used properly.

Does Memories of Matsuko have a happy ending?  There are those who would say not, and I can't say that I blame them, but also don't agree.  If you are the type that understands the previous paragraph, I think you'll agree with me that the film does have an unconventionally happy ending, in that everyone gets what they need, if not always what they want.  Tetsuya Nakashima took an idea he began with Kamikaze Girls in the conveyance of tone through visuals and improved on it vastly in Memories of Matsuko, and I cannot recommend this film highly enough for those not afraid to feel something strange, and perhaps sad, in the search for ultimate happiness.

Third Window's second Blu-ray offering improves in several very significant ways over not only its previous high-def disc, Kamikaze Girls, but also it's DVD version of Matsuko.  First of all the video is outstanding.  Nakashima shot this film entirely digitally and then beyond that manipulated every frame for color, and for effect.  This disc renders his colors beautifully, his animation sharply and brightly, and takes the grime seriously.  For example, several sequences in Matsuko's apartment when Sho comes by to clean up are dingy looking on the DVD, however, on Blu-ray we can see that it isn't just dingy, that there is a fine dust permeating the air in the room.  That detail was not evident on DVD, and it makes more sense now.  Also, all of Nakashima's digital tinkering can now be seen exactly as he intended, which is essential for a film that is so heavily filtered.  There are times where the whites in the film seem to bloom and bleed, but I feel pretty certain that it is all part of Nakashima's intent.  In short, Memories of Matsuko looks amazing, if you have Third Window's DVD or the old HK disc, you can feel secure in trading up.

Matsuko's audio also improves with a DTS-HD 5.1 Japanese language track as the only option, but it is really the only one you need.  The dialogue is clean and clear, and the music heavy soundtrack is expertly rendered across the sound field.  One thing I didn't mention above is the soundtrack, which is wonderful.  Variations on a theme play throughout the film, and lend coherence to the many moods of Matsuko, linking all of the phases of her life very effectively.

Third Window have provided a second, PAL encoded, DVD of extra features.  Most of these bonuses are shared with the DVD version, though there is a brand new exclusive to Blu-ray interview by Midnight Eye's Jasper Sharp with Gabriele Roberto, the composer.  Also included are a thirty minute behind the scenes featurette with English subtitles and many interviews with Nakashima, a very entertaining storyboard to film comparison which not only shows that but also some rehearsal footage, which is very fun to watch.  Rounding out the special features are a trailer for Memories of Matsuko and some trailers for other Third Window properties.  The first two bonuses are a lot of fun and well worth watching.

Third Window have really outdone themselves on this one.  Memories of Matsuko on Blu-ray is really a sight to behold, and I think I'll be revisiting this one with my wife soon, something I don't usually do so soon after reviewing a film.  I highly recommend this package!

Third Window have released Memories of Matsuko on an ALL REGION Blu-ray disc!  So, import away!

Do you feel this content is inappropriate or infringes upon your rights? Click here to report it, or see our DMCA policy.
Tetsuya NakashimaMuneki YamadaMiki NakataniEitaYûsuke IseyaMikako IchikawaComedyDramaMusical