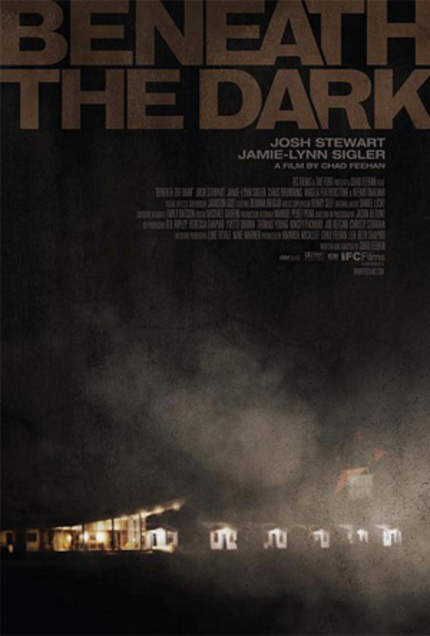 Actress Jamie-Lynn Sigler is probably best known for the seven seasons in which she played Meadow, the only daughter to mobster Tony Soprano in the iconic HBO series, The Sopranos. In the years since, she's been branching out with roles in comedies and more upbeat fare like How I Met Your Mother and more prominently, Entourage.

And the young actress continues to branch out, most recently playing Adrienne in Chad Feehan's psychological thriller, Beneath the Dark, coming to DVD on March 29th through IFC films. Ms. Sigler talked to ScreenAnarchy about her role in the film as one half of a once-happy couple rapidly deteriorating during their stay at a roadside motel.

ScreenAnarchy: How were you approached for this role and what about it appealed to you?

Jamie-Lynn Sigler: I was sent the script by my manager and it was just very different from what I was doing. [I was] going back to my second season of Entourage, and I wanted something a little bit meatier and grittier and darker--which basically, I found. So when he sent me the script I really liked it, but I wanted to meet Chad and talk to him and just see his ideas and how he was going to go about it and not sort of fall into genre clichés, you know what I mean?

JLS: And I thought he was extremely intelligent and we meshed really well, and he had me meet Josh [Stewart, who plays her boyfriend Paul in the movie], and read with him once. And then we started pre-production and talking about the film. It was a fairly easy process.

ScreenAnarchy: Could you talk a bit about your prep during the pre-production process for the large emotional component to the movie?

JLS: I normally like to do a lot of backstory for my characters whether the audience ever sees it or not. It just sort of grounds you as an actor and helps you. But Chad is really cool because he was giving me playlists for my iPod of tonally what he felt about Adrienne. He gave me a lot of films to watch to sort of give me an idea of where he was going--films like Sling Blade, In the Bedroom, and he gave me this British film with Andrew Garfield before anyone knew who he was here called Boy A, which was amazing.

It was sort of the closest to what [Chad] was going for with Beneath the Dark because it was really about that question in life of if you choose a different path, can you be redeemed for actions and choices you made in the past. Can you change your choice of life and who you are? Or will you eventually have to pay the price?

ScreenAnarchy: And what did you personally think about that theme? That sort of overall message and morality of the movie?
JLS: It's a question we all have. I believe in what we like to call "karma," I believe in giving and getting, I believe in "like attracts like," but I also believe that people can change and I believe that each day is a new day. So it's a little daunting to think about the fact that eventually everybody meets their fate. But it could be the truth--we don't know.

But as far as Adrienne was concerned, she represented that other choice for Paul. For me--Chad kept stressing to me, "You're the light, you're his light." Because you're the one who's a witness and a victim in all of this [while] being taken for this ride.

With a character you just have to be very much in the moment. So once I read it a few times as an audience [I] really had to pull myself away from that and just really live scene to scene and moment to moment because you can't really know--she doesn't know anything that's going on. So it was a good challenge in that way too.

ScreenAnarchy: You know, I asked Chad this question yesterday: do you think on balance Paul got what coming to him? Was the morality of the situation "fair" to him?

JLS: Honestly? No. Because I don't think he was ever a malicious person, but I think he was a victim of being young and not being experienced enough to make proper choices. You know, no matter where you are in life, you're going to be presented with those. I think he made a grander course of his life but unfortunately, he fell victim to it.

So no, I don't think it was fair. But I also feel like I'm partial to Paul because I adore Josh. And I [saw] him in an experience as a character, and as an actress you love the person you're playing opposite.

ScreenAnarchy: Given how fractured the narrative was, what kind of efforts were made to maintain the tone and sense of emotional continuity throughout the shoot?

JLS: We were in the middle of nowhere. So tonally for the film, as far it feeling creepy and sort of out of your element, we didn't need any assistance with that--we were in that situation. None of us had cell service and we were in a town with a population of 2. We were the most people I ever think were [there].

But you know, we actually kept it pretty light on-set, surprisingly in spite of the heavy content. I think you sort of have to because we all would have gone mad, being that far out, away from civilization and then staying so deep and heavy with the whole process I think would have been hard on all of us. So we were blasting a lot of Journey and dancing and joking around between takes. I think once we found that place we were able to tap into it when necessary, but I think we all needed a break in between because it was pretty heavy.

ScreenAnarchy: You know, that kind of brings up an interesting point--you talk about Chad's shooting style and this was his first time behind the camera for a feature. As an actress, what kind of help were you able to give him in making the film?

JLS: No, he had it down! He's been involved with projects before and he went to school, and he knew what he was doing.

I think every director--there's a time where we all sort of take a little bit longer than we should be or taking a little bit more time and liberty. But I think everyone was cool with that because we were in one place and all cared about the project and wanted it to be the best, but I think that comes with experience. I didn't have to tell him anything. He ran a good ship.

And you know, directors and actors can set the tone for everything, like he had his boom box and was blasting Journey and 80's tunes between setups, so he kept us all in good spirits. He was very much a cheerleader for all of us and that was very much appreciated and I think helped with the whole shoot.

ScreenAnarchy: You mentioned that you were looking for darker, grittier roles. Are there any particular projects like that that you're circling?

JLS: I'm actually writing right now. I'm so heavily engrossed in it that it's sort of hard to focus on anything else. I shot a pilot and I did a play in the Fall and that's not going so I just sort of--I want to go back to episodic television [but] I want to find something else. Maybe a little bit darker, maybe a comedy, I don't know.

I'm so engrossed in what I'm doing right now, [and] I love being able to bounce around and do different things. I would love to do something else in the vein of Beneath the Dark and I think I'll find it when the time's right.

But I wouldn't say that I'm looking for a specific thing right now.

Beneath the Dark hits DVD on March 29th.

Do you feel this content is inappropriate or infringes upon your rights? Click here to report it, or see our DMCA policy.
Chad FeehanJosh StewartJamie-Lynn SiglerChris BrowningAngela FeatherstoneMysteryThriller