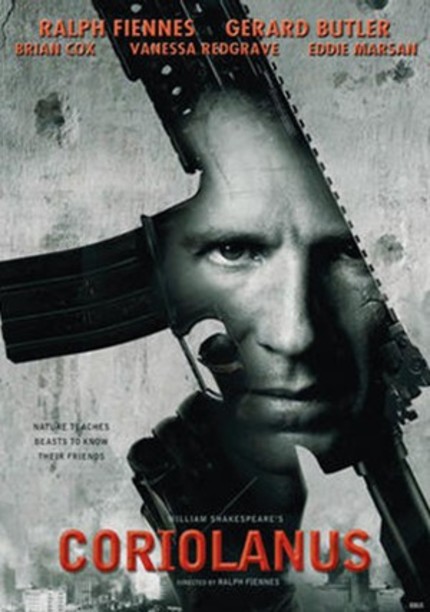 William Shakespeare did not write for high society; he wrote for the masses. All of his plays were meant to be seen in a theatre that permitted London citizens to pay mere pennies and stand for three hours. His audience would be able to understand the dialogue and the story. And this is what his plays are about: dialogue and story. There were few fancy sets or costumes; only what was absolutely necessary for the audience to understand the context.

So when any Shakespeare play is a) set in a different time period and b) made into a film, it both denies and embraces its origins. Ralph Fiennes' directorial debut Coriolanus sets the scene in a contemporary Rome, which allows for modern warfare and reflection on our modern dilemmas of petty rivalries, the people vs. the state, and soldiering vs. politics. Placing it on film allows for a strange intimacy that is not often seen in war films.

Fiennes plays the title character, a general of Rome who has won many great battles for his city-state, though he cannot seem to defeat his greatest enemy, Aufidius (Gerard Butler). The city-state is in chaos, as the people are starving and the grain stores are blocked, the people believe by Coriolanus. The Senate decides to make him Consul (the leader of Rome), but he must not only win over the Senate, but the people as well. He must show them his scars, metaphorically and literally. But Coriolanus does not like the people, or more precisely the common man, who does not offer his life in military service.

The camera spends much of its time circling Coriolanus like a bird of prey. War is a filthy, bloody business, one that Coriolanus relishes. His shaved head, covered in dirt and blood, is not his mask; rather, that is the cleanliness that is forced upon him when he is expected to pander to the common people. Fiennes seems to be taking a page from Kathryn Bigelow in using handheld cameras, rack focus and constant close ups in order for the audience to view the face of war. This is meant to be as much documentary as fiction. Fiennes translates the play to a contemporary setting and shows the contemporary arenas of military war (the bombed out city streets) and the war of public opinion (the television studio.) The use of the handheld camera and intimate shots emphasizes that now, soldiers must win over public opinion in wars that they didn't until the Vietnam War.

Certainly, you can count on an actor of Fiennes' caliber to assemble a top cast, including Vanessa Redgrave and Brian Cox. Fiennes knows that Shakespeare is understandable if you get the right performers. Butler seems a bit out of place though; while it is nice to hear him speak the Bard in his natural Scottish accent, he lacks some gravitas at the climactic scene. Fiennes himself is all muscle and guttural utterances, a man used to only shouting the war cry and not the soft appeasement. The first half of the film takes its time, slowly building the story and allowing room for movement; but the second half seems both crammed and stalled, as though Fiennes wasn't quite sure where to edit. But considering the current state of the planet, between civil unrest in many countries and lack of adequate food resources, this adaptation is timely, and overall worthy.