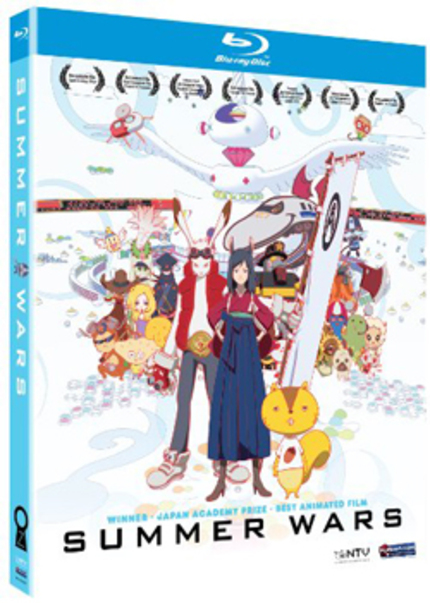 Summer Wars was the Japanese animated film from 2010 on these pages.  We've reviewed it a lot, so I'm not going to get too deep into all that, you can check below for links to reviews.  What I will say is that it is a great film!  It made my top ten for 2010 as one of my most memorable movie experiences of the year, and this Blu-ray confirms that my initial impressions were correct.

Summer Wars is about a lot of things, but mainly it is about family, and what that means.  Family is of great importance everywhere, but as we move forward in this technological age, it becomes easier and easier to slip out of physical contact with people and to become more deeply engaged in cyber communities, like this one.  Summer Wars reminds us of what it is to be human, and how everyone has their role to play in life, how team work is the basis of all success, how, even in this age where you can do almost anything without even getting off the toilet, it is those real connections that matter.

Mamoru Hosoda is no stranger to directing animated features, after doing a couple of Digimon movies, he finally broke huge on the international anime circuit with The Girl Who Leapt Through Time, which is another coming of age story, that time adapted from a popular novel that had adapted to live action, and has again been re-adapted to live action.  That film captured life in modern(ish) Japan through the life of a girl and her adventures with time travel and how her attempts to make life better didn't always ultimately pan out.  Summer Wars takes that technological theme and expands upon it 100 fold in the creation of OZ, and online world where everyone does everything, from chatting, to playing cards, to monitoring bank transactions, utilities, and nuclear weapons.

Surely we can all see how this could go awry, however, the film's initial conceit is that no one seems to have thought of that.  At least, they didn't think it could happen.  They are, of course, proven wrong, and all hell breaks loose when an evil (inquisitive?) bot goes on a rampage, gobbling up the user accounts of people and entities and using them for his own devices.  It is then up to the Kenji and his fake-girlfriend Natsuki's family to take him down and save the world.

This all takes teamwork, and the variety of well-drawn and realized characters makes it a joy to watch.  Hosoda's animation of the scenes in Natsuki's ancestral home are delightfully idyllic, in contrast to what they are going through, as they not only deal with the massive problem of the world going to hell, but also the same problems that every family deals with, and with equal importance placed on each type.  Summer Wars' sound design is worth noting, as all of the scenes in the home are filled with wonderful ambient noise that allow the viewer to become enveloped by the scene, and to feel a part of the film, creating a sense of empathy for the characters.  But, in my opinion, the real star of the film is OZ.

OZ is imagined as a sprawling, almost infinite, network in which avatars and move about freely and engage with one another easily.  The visualization of OZ is stunning, it feels like you are inside of a network, and you can imagine how it all works, even if it looks infinitely complicated.  Those of us in the younger generation who haven't really lived as adults without the Internet, can feel like this is the place that we've all spent so many of our young years, and it feels right.  What is also very interesting is how Hosoda shows people in the real world engaging with OZ in such an active way, despite their views of the world not being as active or three dimensional as the viewer's.  One thing I really liked about the film, and I mentioned this in my capsule from my top ten list, was how it shows how people can change from their actual life to their virtual life.  Even the most meek among us IRL (in real life) can be superstars online, world changing heroes.  I don't know what Hosoda was trying to say there, but I can certainly relate to that feeling, as I know a lot of people can.

As passively and naturally colored as Natsuki's Jinnouchi estate is, OZ is brightly colored.  The distinctions between the two are clear, and yet when we see characters from the real world inside of OZ, we can recognize them instantly.  Hosoda's gift for characterization is a great thing, and really helps to connect the two worlds.  If it weren't for that, this could very easily have felt like a disjointed film.

Summer Wars is complex and yet it imparts very simple lessons about being human.  I really enjoyed it, and if you haven't seen it yet, even if you aren't an anime fan, I think you should.  This film should have been nominated for an Academy Award, and I get the feeling that if there had been five slots, it would have been a shoe-in.

Summer Wars is traditional hand drawn animation, and has the modern advantage of being scanned in directly with no film intermediate necessary.  As such, the film looks perfect on FUNimation's Blu-ray disc.  I saw the film projected from DigiBeta last summer, and this presentation blows that one away.  There is not a line out of place, and the film looks marvelous, completely including the viewer inside of its world.

FUNimation provides both an English and original Japanese language Dolby TrueHD 5.1 track on this disc, and both are awesome.  I sampled each, and while I still prefer the Japanese track, I would have no issues with listening to FUNimation's professionally done English dub.  They have a fine track record of dubbing, and if this option makes Summer Wars more appealing as a blind buy for some anime newbie, I'm all for it!  The track is quite active, with action happening all around you, even in the subtlest of ways.  Even just a car pulling up the driveway of the Junnouchi estate makes you feel like it is whizzing right past you, and the ambience I mentioned above is perfect in every way, again, creating the illusion that we are sitting right there at that table, ready to eat dinner.

FUNimation has provided a host of interviews with all of the leading actors as well as Hosoda himself.  The actor interview are interesting to listen to and show plenty of behind the scenes footage of them performing in the studio, which is fun to watch and mentally match up to the scenes in the film.  Ryunosuke Kamiki, who plays Kenji in the film, has the longest section, and his is very interesting, with lots of the aforementioned behind the scenes footage.  I love watching that kind of stuff, there are similar segments on the DVDs of The Boondocks TV series, and I find myself re watching them often.  Mamoru Hosoda's interview is also very interesting, and well worth spending a few minutes with.  He seems like a very laid back guy, and it is hard to imagine, at first glance, a man so calm creating such an intense and vibrant world, but hey, why not?

FUNimation rounds out the disc with TV spots, theatrical trailers, and teasers for Summer Wars as well as some of their other releases.  All are in SD.  A total package, and for those lucky purchasers, the first print comes with an exclusive embossed slipcover and four two-sided art cards featuring the main characters' OZ avatars!  As a note, FUNimation actually shipped so many copies of this to retailers that some pre-orders even got the second printing without the slip and cards, but, realizing this was a disappointment, they have set up a system to provide at least the slipcover to customer who didn't get one in their order, I'll post that link below.  Summer Wars is hard coded to Region A for Blu-ray.

Summer Wars Rules!  And this Blu-ray presentation is the perfect way to see it!  If you were one the fence before, please, come down and take a chance, you'll be rewarded!