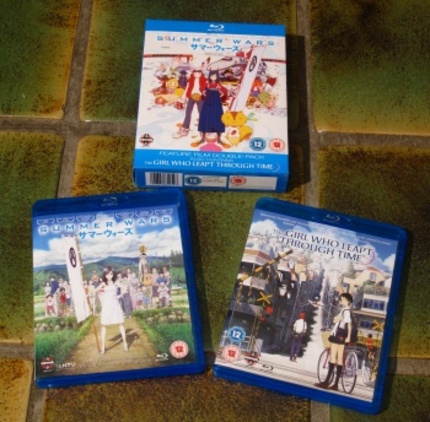 This is going to be a rather short review, and for the following reason: last year I have already done a BluRay review for "Summer Wars".

That article concerned an edition which was regionfree by accident and was actually pulled from the market soon after. In the whole discussion which followed in the comments, Manga UK offered to send me their version for a comparison and as I am Dutch I am genetically incapable of refusing a gift.

But Manga UK had a neat trick up its sleeve: they actually bundled "Summer Wars" together with Hosoda's earlier movie "The Girl Who Leapt Through Time".

Did I like that? Hell yes!
Did it affect my opinion of "Summer Wars"? Hell No!
Will Manga UK mind? I don't think so... Read on!

By now this film has been reviewed so often that I'll keep the descriptions quite short. If you want more you can have a field day with all the links below!

A nerdy high-schooler jumps at the opportunity to help the most popular girl in school for a few days during the holiday with some vague job. Little does he know that he has to play-act being her fiancée at a huge family-gathering. Things quickly go from bad to worse when the police identifies him as the hacker who is wrecking the world's largest social network.
Thing is, he is innocent. Together with his friends and his many newly acquired family members he tries to find the real culprit and maybe even save the world...

This was my favorite film I saw in 2010. It shared that position with another one (or maybe two), but that is besides the point. In my yearly overview I summarized it as this:

Mamoru Hosoda's newest is a very strong, exciting anime and rightful winner of many prizes including the audience award for best animated feature in Fantasia. Here he juxtaposes a large family and the Internet, showing both to be tools for causing and solving many crises. The whole film combines into a collection of things I liked (it's an ode to Information Management for starters), only executed better than I hoped. When I wasn't nodding in agreement to the screen I was watching it intently with sweaty palms.

Nough said. If you want more, read my other review.


On to THIS disc:

Manga UK has released "Summer Wars" in two editions: one just for the movie itself while the other one is a double-pack also containing a bare-bones BluRay of Hosoda's other excellent film "The Girl Who Leapt Through Time".
Both releases are fully English-friendly but region-B locked, meaning it's only supposed to be played in Europe, Africa and Australia/New Zeeland.

Well, important things first: on the visual front there is no discernible difference in quality between any of the BluRay releases I've seen. Especially the digital world of OZ benefits from being seen in HD and all versions deliver.

However, the US, UK and Australian releases have a slight change in the opening credits: the original credits showed big Japanese titles with tiny, elegantly shrinking English titles underneath. Instead we now have static slides in an ugly big font. I can understand this move with regards to the DVD version as the original credits showed the English (sub)credits in tiny, tiny letters which are absolutely unreadable on SD. On BluRay they were juuuust watchable though and I actually used the opening sequence of the Taiwanese and French editions to show people how awesomely sharp the BluRay was. To see it altered like this is a bit disappointing but it is by no means any sort of dealbreaker: the film itself looks as awesome as ever.

For sound, we now have a full HD 5.1 English soundtrack to accompany the full HD 5.1 Japanese soundtrack. Generally I always watch the Japanese one with subtitles, but that is because in The Netherlands we are reared and raised on subs so we don't mind them.
In English-speaking territories however an English dub is deemed necessary for a release to be economically viable, and this is also what caused the English versions of "Summer Wars" to be released so much later than the non-English versions.

For those avidly awaiting or needing the English dub: rest assured it is a good one. It maybe suffers a bit from the over-familiarity of certain voices but the conversations have a pleasant and natural flow.
As for the English subtitles, they are true subtitles and not dub-titles. Interestingly they are slightly but noticeably different from the English subs on the Taiwanese edition, which seem closer to the French, German and Dutch subs on the French BluRay.
My knowledge of Japanese is insufficient to see which version is the best, but all are good. One uses "Oh, definitely" where the other uses "I am sure of it". Little things like that.

Next we have the extras, and these are all English-friendly. Splendid!
We have a 13-minute interview with Mamoru Hosoda, done at the festival of Locarno (which looks so unbelievably gorgeous that I must visit it some day). There are several short interviews at about 5 minutes each with the Japanese voice-actors.
Also included are a big selection of teasers, trailers and TV-spots for "Summer Wars" itself, and trailers for the Manga UK releases of "Evangelion 1.11" and "The Girl Who Leapt Through Time".

Finally a word on packaging. It baffles me to see people complaining in other forums about the cover of Manga UK's edition, stating that the US version was nicer. Thing is, the Manga UK edition has a reversible cover, with the US artwork on the other side. Problem solved (duh...). For completion's sake, the normal cover shows the real-world-related poster while the US showed the Oz-artwork. Both posters are riffs on each other so I am glad Manga UK opted to include both.

The double-slipcase used for the edition which is bundled with "The Girl Who Leapt Through Time" also shows the OZ-artwork. Cool enough.

One of the best movies of 2009 / 2010 (in the opinion of "this same old aging otaku") has now been released in several excellent packages worldwide. I cannot recommend this movie enough and there isn't any reason to avoid the Manga UK edition. In fact, for the current price the Manga UK release can be considered to be a must-have. And the double-pack which also includes a BluRay of "The Girl Who Leapt Through Time" is only a few bucks more, which is almost illegally cheap and must be one of the best buys currently out on the market for BluRay collectors (anime-lovers or not).

You can order the Manga UK version of "Summer Wars" through our affiliate:
link to this disc.

Alternatively, you can (and I recommend this) buy their boxset which includes "The Girl Who Leapt Through Time", also through our affiliate:
link to this disc.