UPDATED: A review for the English-friendly Taiwanese BluRay of SUMMER WARS 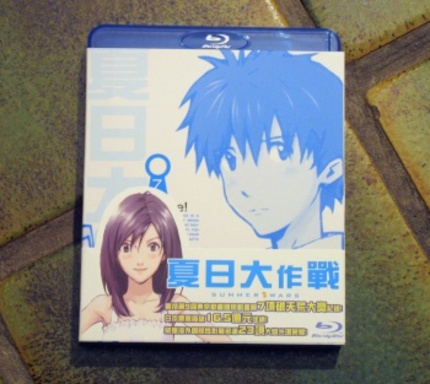 (NOTE: we've been contacted by the distributor of this disc, stating that it is not their intention for this edition to be sold outside of the region of Taiwan and several surrounding Asian countries. Furthermore, the new Taiwanese prints of this title are proven not be as regionfree as the first printing was.

For those willing to shell out quite a bit more money than on average, a legal High-Def version of this excellent film WITH English subtitles can be obtained courtesy of Taiwan.

But how is the disc quality-wise?
And why did I call this anime "excellent" just now?
Read on...

High-school student Kenji thinks he's lucky when Natsuki, the most popular girl in school, asks him to help her with a job for a few days during the summer vacation. The "job" in question concerns preparing the ninetieth birthday of her great-grandmother. How difficult can that be, even for a math nerd with low confidence?

But upon arrival at the family's estate, Kenji gets a few nasty surprises.
First, the family is HUGE, a fiercely hierarchical clan with a bloodline (proudly) traced back centuries.
Second: Kenji is to act as Natsuki's educated and rich fiancée for the duration of the festivities.
Third: less than a day after arriving, Kenji's cover is blown when the authorities are looking for him as the person responsible for hacking the world's largest social Internet-network.

Kenji has to prove his innocence by fighting a dangerous Internet-adversary. And with Natsuki's clan suspiciously examining this stranger in their midst, he gets hindrances but also help...LOTS of it.

Mamoru Hosoda took everyone by surprise in 2006 with "The Girl Who Leapt Through Time". At the time he was primarily known for creating part of "Digimon: The Movie", a "One-Piece" film and leaving Studio Ghibli because of creative differences with Hayao Miyazaki over "Howl's Moving Castle", which he was slated to direct.
But "The Girl Who Leapt Through Time" turned out to be a huge hit both with critics and with the public. It basically made everyone sit up and think "Who IS this guy?".
So his next movie was eagerly awaited, if only to answer the question whether Hosoda was a real talent to be reckoned with or just had been very lucky with his previous movie. Well, in short: "Summer Wars" proves that Hosoda is a major talent, one of the brightest stars of Japanese animation today in fact.

On the surface this film is a business-as-usual nerd-saves-world-and-gets-girl-film, and I've heard some people describe it as "Meh" (you know who you are...). But scratch a bit deeper and you see an intelligent comment on human relations and networking in general. It amuses me to see reviewers describe this film as "warning people of the dangers of the Internet while showing the value of having a family". It's true, but the opposite case is also true: any reviewer stating that "Summer Wars" warns people against the dangers of large hierarchical families while showing the benefits of having an Internet at hand will ALSO be right.

In fact, the film makes a definite case that any network is a valuable one, no matter if it's family, friends, colleagues or a slew of faceless people on the other side of the world contacted through your computer. "Summer Wars" bluntly refuses to take a side in the argument of new networks versus old ones. The dangers, limitations and benefits of both are extensively shown, and on top of that the statement is made that the benefits of any network outweigh its dangers. As long as a combining of individual talents is made possible, there is a chance for advancement that would never be reached by an individual working alone.

For showing this, Hosoda uses exaggerated versions of both juxtaposed networks: the family and the Internet. Natsuki's clan is a widespread network in itself, capable of calling in huge resources when necessary yet as prone to shutdowns as any IT-infrastructure. The Internet is shown through a universal graphical user-interface called "Oz" which anyone in the world can access using a computer, PSP, DS, mobile, cable television, you name it. If it has a screen you can enter "Oz" with it.

How these two sprawling environments are bounced against each other forms the core of the movie, so much so in fact that the "romantic comedy" between Kenji and Natsuki is firmly shoved into the background. To keep the film contained to these two networks some huge coincidences have been worked into the script but I didn't mind them so much, as Hosoda is pretty honest about the artifice. It helps that "Summer Wars" is high-paced with especially the second half (with a typically Asian multi-tiered endfight) just whooshing by.

Animation-wise the movie is also split between the two networks. The family part uses the same breezy approach as "The Girl Who Leapt Through Time", where the animation aims for showing characterization while the backgrounds are lovingly painted Ghibli-style.
But the "Oz" environment is done as 3D-cgi and it's gorgeous. Even though it looks believable as a user-interface Mamoru Hosoda pulls out all the stops for the action when the shit hits the fan, not hesitating to throw in literally epic millions of details. And he also does the impossible by introducing a rabbit cooler than Bugs Bunny: the competitive Internet fighter King Kazma, whose fights have been so lovingly choreographed that these can compete with most of the best live-action action scenes I've seen this year.

"Summer Wars" turns out to be a total love-letter to nearly all themes covered by Information Management, the very subject I chose to graduate from college with. I've spent a significant part of my working life explaining to managers that a good secretary with a Filofax can be a more awesome information system than a mainframe, and a significant part of my non-working life explaining to non-managers that competitive computergaming need not be a bad thing. This movie just clicked for me in soo many ways...

Mamoru Hosoda's newest is a very strong anime and rightful winner of many prizes including the audience award for best animated feature in Fantasia.
The whole film combines into a collection of things I liked, only executed better than I hoped. When I wasn't nodding in agreement to the screen I was watching it intently with sweaty palms.

For me, "Summer Wars" has turned out to be the movie-of-the-year so far, a shared first place with Matsumoto's "Symbol" (and where is THAT BluRay, huh?).
Very highly recommended!


On to the BluRay:

When I saw this in a cinema at the Imagine 2010 Festival in Amsterdam I just knew I had to get me a high-def version of this film. While DVD would have sufficed for the real-world animation (as my current Studio Ghibli collection will attest), the shenanigans in the "Oz" environment were going to need the maximum amount of available pixels. And the good news is: the Taiwanese disc delivers the goods both in the audio and video department. The image is strongly colorful and sharp enough to even read the tiny, tiny English opening credits underneath the big Japanese ones. A selection of Japanese soundtracks can be found including a big fat lossless one. The English subtitles are good, but there is no English dub (people wanting one will need to wait till February...).

And that covers the main movie, which frankly is the big draw here. There is a separate DVD with extras included, showing the film as storyboards, a slew of cinema and television trailers (a dozen in all), some shots of premiere events and short interviews with Hosoda and the major voice-actors. Unfortunately, all of these extras are only subtitled in Chinese.

Packaging is a simple Bluray-case housing both discs and a film cell, and there is an attractive stylishly embossed slipcase showing Kenji on one side and Natsuki on the other. Disconcertingly, the BluRay disc is thin enough to be very translucent but I haven't encountered any problems playing it yet.

Quick buyers were enticed with a goody-bag containing marketing materials like an "Oz" Mouse-mat, but I wasn't quick enough so be warned: many vendors don't ship the goody-bag anymore.

Bottom-line: this is a very acceptable copy of the Japanese edition which had an equally high quality transfer, only this one actually has English subs on the main film. Those that want to dive deep into extras or need a dub, wait a few months: your time will come...