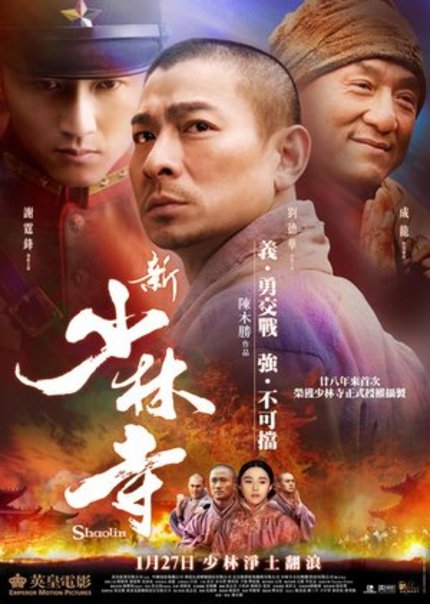 For his first full Mainland production, veteran director Benny Chan (MOMENT OF ROMANCE, NEW POLICE STORY, INVISIBLE TARGET) delivers a grand martial arts spectacular, brimming with action, redemption and a generous helping of Zen Buddhism. Evolving out of the 1981 Jet Li starrer THE SHAOLIN TEMPLE, Chan takes the basic conceit - a man hiding out in a shaolin temple is converted to Buddhism and becomes a hero - and turns it into a full blown period epic, with largely satisfying results.

Set during the tumultuous Warlord era of the early 20th Century, Andy Lau plays Hao Jie, a ruthless warlord, whose overwhelming victories and amassed personal wealth and success have come at the expense of the country's vast, struggling population. The countryside is ravaged by rival armies jostling for control of a deeply divided nation, more often than not leaving it to pure hearted souls such as the Shaolin monks to clean up the devastation left in their wake.

However, when Hao is betrayed by his own ambitious apprentice Cao Man (Nicolas Tse), sees his wife (Fan Bing Bing) abandon him and his young daughter killed, he is forced to flee for his life. Ultimately Hao seeks refuge at a Shaolin temple and though reluctant at first to help a man whose villainy they have witnessed first hand, the monks welcome him in. Hao disguises himself as a monk and slowly but surely the innate goodness of the monks help repair his shattered soul.  No sooner has he found his new path, however, than Hao and the other occupants of the Shaolin temple are sucked into a bloody feud, with Cao right at its centre.

The message that "what you need is more important than what you want" is writ large throughout SHAOLIN and the film is not one for nuance and subtlety. The characters are broadly drawn and their character arcs rarely complex, but the film is consistently engaging throughout thanks to a number of complimentary factors. SHAOLIN is far and away Benny Chan's most beautifully shot and richly designed film to date. The exotic rural locations exude an ethereal serenity, while the numerous action sequences are incendiary and kinetic. Hao's escape is realized as a frantic horse and carriage chase that careens through the city, before tearing up a crumbling mountain pass. The explosive finale, which sees British artillery lay siege to the temple, sees FX co-ordinator Li Chung Chi employ enough pyrotechnics to make Michael Bay blush, but most importantly for a film that features more than 50 real Shaolin monks, is the kung fu.

Action director Corey Yuen choreographs some excellent showpiece confrontations, most notably involving Wu Jing and Yu Xing who play the two major monk roles. Wu gets an early scrap with Nicolas Tse, while Yu has an excellent sword fight with veteran action director Hung Yan Yan as part of the film's exhilarating climax. Jackie Chan, originally hired for a lead role until commitments to THE KARATE KID forced him to back out and Benny Chan had to rewrite the whole film, still enjoys a notable cameo. While the comedy Chan brings to his scenes may be at odds with the otherwise serious tone of the rest of the film, it nevertheless avails him the opportunity to showcase some of his trademark skills. SHAOLIN also features numerous training montages and sweeping crane shots as the monks hone their skills and Andy Lau learns how to harness his chi. Suffice to say that SHAOLIN delivers on its promises in terms of action.

Less successful is how the film handles the broader drama surrounding our hero and the temple. Perhaps because we spend the majority of the film seeing the struggle from Lau's perspective, we never get a real sense of the suffering the ordinary people are going through. Crowds of homeless, needy villagers are shepherded around more as a McGuffin than real victims of tragedy and genocide and even some of the major characters, namely Tse's dastardly young warlord and Fan's helpless and conflicted wife, remain somewhat one-dimensional.

These are minor quibbles, however, as SHAOLIN succeeds in being both entertaining, moving and profoundly spiritual throughout and is quite possibly Benny Chan's most accomplished film to date. In a part that was written especially for him, Andy Lau perfectly captures the cold-blooded villainy of a power-drunk warlord, the devastated humanity of a grieving father, and ultimately the profound resolve of a man at peace with himself and determined to atone for his crimes in the most noble of ways possible. He is the centre of calm and tranquility in a film brimming with action, excitement and melodrama, delivered with assured confidence and skill.

Good to hear this one hasn't become an unholy mess, and here's hoping for a regionfree BluRay soon. But first: a screening at IFFR perhaps?

but more importantly, is there any "Foreigners bullying Chinese" or "Japanese people invading China" scene in the movie? cuz I am tired of that sh*!

im soooooooooo glad this is not going to be a huge disappointment!!!!!!!!! cant wait till it comes out...

Even though my interest in this film is due to Wu Jing's involvement, I would pay just to look at the scenery which was STUNNING! even the brief amount we saw in the trailer was magnificent... Good work Benny!

Yeah the Russians (I'm guessing they're Russian yet they speak with English accents? Who knows, maybe I missed it) cannon the shit out of the temple towards the end.