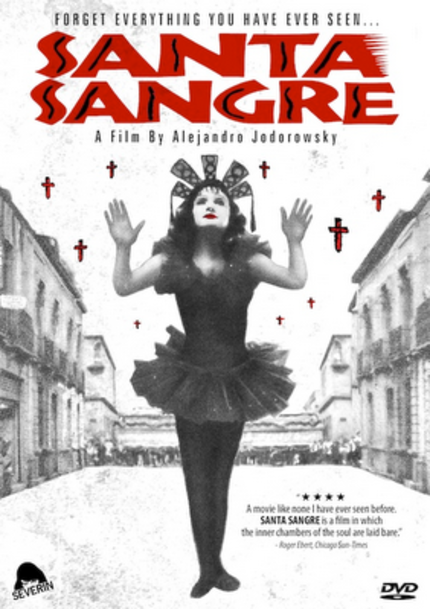 In preparation for the January 25th release date and its digital home video debut, Severin Films is bringing the Alejandro Jodorowsky masterpiece Santa Sangre to select big screens in Los Angeles, Austin, TX, and Boston.  Here's the word from Severin Films on Santa Sangre's limited screenings around the USA:

To commemorate the long awaited re-release of Alejandro Jodorowsky's masterpiece SANTA SANGRE on DVD and Blu-Ray, Severin Films and The American Cinematheque will be presenting a 35mm screening of the film, preceded by a reception, at the Egyptian Theater, Hollywood Blvd. There will be a special Q & A after the film with soundtrack composer Simon Boswell, whose other credits include work for Danny Boyle, Clive Barker and Dario Argento.

More screenings will take place on 1/19 at the Alamo Downtown, Austin, TX, 1/24 at the reRun, Brooklyn, NY and 1/24 at the Brattle Theatre, Cambridge, MA followed by a Q & A with Star Sabrina Dennison.

Blanca Guerra, Guy Stockwell and the filmmaker¹s sons Axel and Adan Jodorowsky star in this surreal epic about a young circus performer, the crime of passion that shatters his soul, and the macabre journey back to the world of his armless mother and deaf-mute lover. "This is a movie like none I have seen before," wrote Roger Ebert in his original four-star review, "a wild kaleidoscope of images and outrages, a collision between Freud and Fellini. It contains blood and glory, saints and circuses, and unspeakable secrets of the night. And it is all wrapped up in a flamboyant parade of bold, odd, striking imagery, with Alejandro Jodorowsky as the ringmaster. SANTA SANGRE is a movie in which the inner chambers of the soul are laid bare."

The DVD/Blu-Ray debut of SANTA SANGRE from Severin Films will street on 1/25/11. In addition to the hi-def transfer supervised by cinematographer Daniele Nannuzzi, the staggering array of bonus Features on the Blu-ray and two-disc DVD includes deleted scenes, an audio commentary with Jodorowsky, multiple documentaries and new on-camera interviews with the majority of the film's cast and crew.

There won't be many chances like this, I've already got my ticket, and if you're anywhere near any of those sites, I wouldn't recommend waiting to get yours.

A ticket link for the Alamo Drafthouse screening is below

Get more info on the Jodorowsky retrospective in LA and buy tickets for January 15th here!

Buy your tickets for Santa Sangre at the original Alamo Drafthouse, January 19th!