Blu-ray Review: A Bay Of Blood 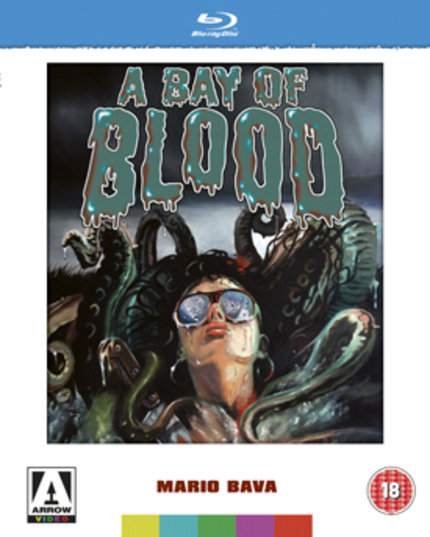 I know we've already had a review from the very capable keyboard of James Dennis, but I can't help wanting to chime in on this package.  He summarized the plot quite nicely, so I think I'll borrow that, rather than attempting my own:

When Countess Federica Donati (Isa Miranda) is bumped off in the film's opening moments, it sets in motion a chain of gruesome deaths as an assortment of miscreants attempt to takeover the beautiful bay she owns. Amongst those vying for a piece of the pie (or indeed all of it) are an architect intent on development, the countess' daughter, son and husband. Add to this their various spouses and lovers, plus some fun-loving but doomed teenagers partying in a disused night club. The film opens with a pair of brutal deaths and continues in this manner as various characters are swiftly dispatched as they arrive at the lake to investigate what's to be done with the Countess' legacy.

Oh, the things I love about this film.  It all feels like the product of about three different fever dreams colliding and intermixing.  The opening sequence with the death of the countess feels like something from one of Bava's earlier gothic horrors, and predates most of Dario Argento's similar giallo work.  It is a lovely, dark sequence that only hints at the kind of brutality the viewer is in for.  With the introduction of the fun-loving teenagers on the scene, everything starts going haywire, and this is where things really start to get nasty.

Bava takes them out one by one and a pretty rapid clip, but not before showing some fantastically nubile flesh skinny dipping in the tit-ular bay.  As James mentioned in his review, and I in my coverage of Arrow Video last fall, this film is like a blueprint for what became known as the slasher.  A Bay Of Blood came out seven years before the most commonly accepted first slasher, Halloween, and even predates the geek choice of Black Christmas by three years.  Yet, all of the elements are there, especially the camerawork, which may not be technically first person POV often, but it certainly has a voyeuristic feel.

This film was a turning point for Bava, it was his first really brutal and gory film.  His previous films hinted at this brutality, but moving into the seventies, Bava sensed a change was in the air and he went with it.  It certainly bridges the eras between the languid gothic horror films of the late fifties and sixties, and the brutal realistic horror that was so popular among the film crowd in the seventies.  One of the things that betrays the film's age is the music.  Those of us who are slasher fans typically associate these films with electronic dread; the Halloween theme, Goblin's work with Argento and Romero, and so on.  A Bay Of Blood has none of that, it hadn't come into fashion yet.  This is one of the ways the films age shows through, despite being ahead of its time.

At times it is pretty incoherent, and the film does drift off into tangential spaces, but overall, A Bay Of Blood is classic and well worth owning.  Despite what seems like a disjointed script and camera work that, while artfully done, does not have the same precision as Bava's earlier works, the film succeeds in making the viewer feel dirty, watching this group of despicable people taking one another out just feels right.  These guys don't deserve to live, and Bava makes sure they don't, in spectacular fashion.

The Disc:  Again, James went through these pretty thoroughly, but I'll pitch in where I have something new to say.

The video on this disc has been the subject of some debate around the different review sites.  The picture is as sharp as it can be.  As is mentioned in the accompanying booklet, the film was a modestly budgeted affair, and at times the picture isn't tack sharp, however, that isn't the fault of the transfer, it wasn't that sharp when Bava shot it.  This is only here and there, though, overall the image is astounding.  Details you'd never seen before pop out of the screen and grab you.  I've never seen a neck stump in such stunning clarity as in this package.

What is up for debate is the color scheme.  Bava was known for his garish color schemes and theatrical lighting style.  When compared to previous home video versions of A Bay Of Blood, Arrow Video's edition seems a bit muted in the color palette.  Honestly, I can't say it was distracting when I was watching the film, but looking back, I suppose I can see it.  There aren't many people who can make a critical judgment on what the film should look like, but Tim Lucas, the author of Bava bio All The Colors of the Dark, who contributes a commentary, is probably the closest we have, apart from Mario or Lamberto Bava.  Lucas says that the screencaps he's seen online seem muted when compared to the theatrical prints he's seen.  However, I don't think he's weighed in on the image in motion, which can make a huge difference.  As I mentioned above, I didn't find it distracting in the least.

The HD portion of the feature film is the English language edit, which is the version most people are familiar with.  The sound track is probably pretty faithful to how this film originally sounded in theaters in 1971.  The mono dialogue sounds a bit hollow and seems to be a bit low when compared to modern films, but it is perfectly discernible, without any major cracks or hisses.  What does come through beautifully is the score, which I mentioned above, and is one of my favorite parts of this film.

The Italian language version in standard definition is also presented as an extra on the disc and it is noticeably dirtier with an inferior sound mix.  Some people may balk at the quality of this cut, but I think understanding that it is intended as an extra helps to assuage those fears, it is even listed in the extras menu, rather than the audio options.

Each of the exclusive featurettes brings something new to the A Bay Of Blood mythos.  The Tim Lucas commentary is a port from older releases and, while informative, brings nothing new.  The exclusive extras are fun, though, and people looking for new material have a wealth of it to wade through with this package.  James went through most of the video extras, so I'll link to his review below, but now that I have the full retail version to report on, I'll report on what is new.

First, there is a wonderful and informative collector's booklet that has a great essay on A Bay of Blood, gialli in general, and Bava in particular contributed by Jay Slater, noted horror historian.  He gives us some insights into the shooting conditions surrounding the film, and how Bava was able to take a modest budget and make the film look good.  Also, digging through the essay, Slater mentions several other films, both from Bava and others that I am eager to see now.  I enjoyed reading it, and my only complaint is that it is too short, and I would've liked more.

As is typical of Arrow Video Blu-ray releases, included in the package is a fold out poster with Rick Melton's custom cover art on one side and the original Spanish one sheet on the other.  I prefer the Spanish poster for this particular release.  In addition to those artworks, we also get two additional choices for the cover of the Blu-ray itself, you may chose which to display in the awesome windowed slipcase that comes with all Arrow Video Blu-ray releases.

A Bay Of Blood is an all region disc, and I believe that nearly all of the video extras are in 1080p high definition, so there should be very few compatibility issues.  The Italian cut of the film is even upscaled into 1080 HD.  So, while the quality may be lacking there, there will be no system issues regarding PAL/NTSC playback.

I can heartily recommend this disc.  There have been a couple of concerns in different quarters about the color palette and the upscaled quality of the Italian cut, but I find these issues to be somewhat trivial when you consider how awesome the quality is for this package.  If those things trouble you, you could wait, but who knows when someone else will take this on.  A Bay Of Blood isn't' exactly a cash cow, I wouldn't think, and so it is less than likely that another company will put this much effort in to another set.  Just buy it!


A Bay of Blood

Find more inside info and debate on the merits of this disc at Cult Labs.

More about A Bay Of Blood