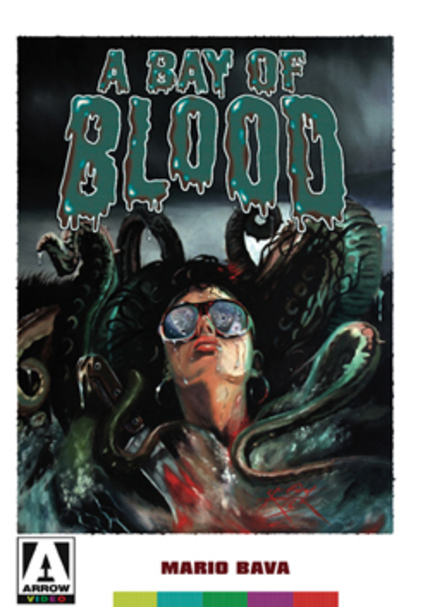 Has it really taken four years for a company to realize that Mario Bava's entire oeuvre is perfect for Blu-ray?  Apparently so, at least it is being done up right by one of the current kings of the international home video market, Arrow Films in the UK.  They've released a ton of great 70's and 80's horror and cult titles on Blu-ray and I hope to put together a little feature on their output soon.

This appears to be Bava's first appearance in high definition, at least in an English friendly form, and it is a good choice.  Bay of Blood (Twitch of the Death Nerve) is a classic proto-slasher that directly inspired Friday the 13th among thousands of other similar films.  No word yet on special features, but Arrow has never skimped in this area so I'm not concerned.  Another area where they excel is packaging.  I don't yet have any of their Blu-ray releases, but I have seen their edition of Day of the Dead, and it is outstanding!  4 different cover art panels on that one and this one is supposed to have the same, at left is the first.

Pre-order Bay of Blood on Blu-ray or DVD from Amazon UK.

More about A Bay Of Blood