DEADHEADS: A Buddy Comedy For The Undead. 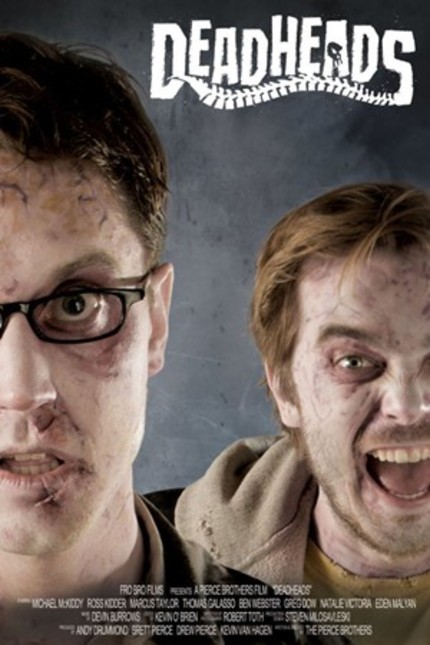 There appears to be a new trend rising in the ranks of the undead, a growing number of directors tired of picturing the things that growl in the night is simply mindless eating machines and instead take a more sympathetic approach. We've had Colin. We've had The Revenant. We've had Boy Eats Girl. And now, thanks to The Pierce Brothers, we have Deadheads.

DEADHEADS is a "zombedy" that is sure to impress--pleasing both horror and action-adventure fans alike. Yup, you heard it first. Horror, meets comedy, meets action adventure!

DEADHEADS is a return to the great comedy/adventure films of the 80's like "Back to the Future" and the "Goonies". The story follows two zombie slackers, Mike and Brent, who find themselves surprisingly reborn from the dead amid a disastrous zombie outbreak. After discovering an engagement ring in his coat pocket, Mike enlists his new found zombie pal, Brent, to embark on a quest in search of his lost love.

What ensues is a hilarious cross country road trip as these two reformed flesh-eating pals hitchhike cross country as they are pursued by a team of zombie killin' bounty hunters!

When these films work what general makes them work is finding the balance between having a heart and eating a heart. And on that count Deadheads certainly appears to deliver. The leads are likeable, the comedy is funny and the gore is suitably gory. Yup, good for the whole family. Check the trailer below.

Do you feel this content is inappropriate or infringes upon your rights? Click here to report it, or see our DMCA policy.
Brett PierceDrew T. PierceMichael McKiddyRoss KidderMarkus TaylorThomas GalassoAdventureComedyHorror