For a film born out of a series of successful viral shorts, Jalmari Helander's Rare Exports feels like a return to a good two decades or more before YouTube even existed. A smartly directed, gleefully irreverent horror film for big kids of all ages that calls to mind the best fantasy of the 1980s, it does betray its origins in its very brief running time and somewhat sketchy, overly pared down story. But it still richly deserves recognition beyond cult status and a possible slot as an anti-festive viewing fixture for some time to come.

The hook is largely the same as the original videos - what if Santa were evil? A demonic force of nature who doesn't merely punish naughty children but kidnaps, terrorises and mutilates them? A faceless corporation have discovered Saint Nick's resting place, imprisoned beneath a Finnish mountain range like Sun Wukong in Journey to the West, and are planning to dynamite their way through the rock to cut him loose. The locals don't quite understand the implication of the strange rumblings from the peak, and only Pietari the butcher's young son has begun to grasp who it is the foreigners have got their hands on.

Helander takes to a bigger budget rather well. Rare Exports uses the snowbound scenery to great effect, launching straight into some awe-inspiring cinematic vistas and conjuring up a genuine sense of adventure that's at once intimate - seen from the perspective of a small boy - and vast. It's clearly not a blockbuster, with really only a handful of locations and a limited number of setpieces, but for the most part the director does a sterling job of keeping that hidden.

The script takes a while to find its feet, with the initial scene-setting somewhat shaky, but the cast make up for it. The viewer's occasionally left unsure where the plot's headed, though Pietari, his father and their friends are quickly, deftly sketched out. They're obvious archetypes, for the most part, but Helander (who wrote the screenplay) has a good grasp of the role each one plays in moving the story along.

All the leads are cheerily likeable, with the actors unknown outside Finland but all turning in strong performances. Onni Tommila as Pietari is particularly promising, credibly shy and reticent at the start but surprisingly natural when he has to step up to the plate and save the day. Whether by accident or design he does a nice line in the kind of straight-faced reserve that characterised many of the child actors in the classics of the genre.

The plot turns on some decidedly creaky gags - old men being very undignified, comical attempts at communicating in English and the like - but the cast treat every one with enough reverential self-awareness none of them fall apart. Helander and his crew know precisely what kind of film it is they're making, and they're clearly having a blast in the process.

Though Rare Exports is occasionally dark, it's always more theatrically sinister than mean-spirited. It's only a touch bloody - enough to rule the film out for younger or more impressionable children, but none of it explicit. There's an all-pervasive sense of fun to the proceedings, with just a little bite: not quite as wilfully anarchic as Joe Dante circa Gremlins, but it gives that same impression the creators can't quite believe they're being paid to deconstruct an icon, like a bunch of naughty kids rewarded for scribbling all over someone's Christmas cards.

Like said childish doodles, though, there's arguably not much to the film. Rare Exports is never less than engaging, but likeable though the cast might be there's a definite sense the majority of the running time is merely treading water until the climax gets under way. On top of that, the climax is a whole lot of fun, yet in one sense it definitely doesn't deliver. There's a Big Reveal implicitly promised that simply doesn't materialise, leaving even the most tolerant viewer a little disappointed, not to mention wondering why things turned out this way? Money? Script problems?

Ultimately, though, Rare Exports is still far above what anyone might expect from a film born of a one-note joke for the internet generation (Snakes On A Plane? Fred: The Movie?). It's daft and childish, yes, but also genuinely funny, slyly subversive and often wonderfully, thrillingly cinematic. The climactic setpiece is still one of the highlights of the year, disappointing or otherwise, and the blackly comic epilogue (which gives the film its title) is a beautifully snide little coda. For anyone who shudders with distaste once your neighbours start putting the lights around their Christmas tree, or even just those who fancy a scary story in the classic campfire tradition, Jalmari Helander's movie comes strongly recommended.

(Rare Exports was screened as part of the 24th Leeds International Film Festival.) 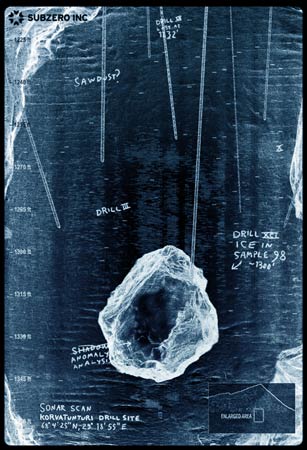