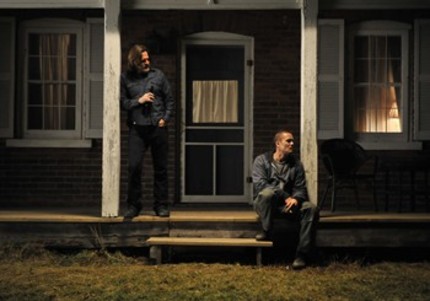 Toronto is awash in talent for this year's installment of TIFF - Bill Murray hanging out by the Diet Coke sample stand, Bruce Springsteen interviewed by Ed Norton, and of course Ryan Redford.  Did I mean Robert Redford? Well, he's here too, but Ryan Redford's first feature, Oliver Sherman, is foremost on my mind.

Seven years after being shot in the head on the battlefield, Sherman Oliver (Garret Dillahunt, DEADWOOD) is still trying to pull his life back together.   When he shows up unannounced and unexpected at the small town home of Franklin (Donal Logue) the soldier who saved his life, he is taken into the peace-time life Franklin shares with his wife, Irene (Molly Parker) and their two young children.  Though Sherman is clearly not "right in the head" Franklin feels bound by compassion and duty to try and do well by his fellow vet.

Adapted by Redford from the Rachel Ingalls short story "Veterans", the real marvel of the film is its ability to steadily increase the tension for pretty much the entire length of the film, offering only enough relief for a quick breath now and again before stoking the fires.  It does so on the basis of exemplary discipline: a script that delicately balances competing yet legitimate viewpoints; meticulous acting that never tips its hand too far; gracefully effective shooting; and an edit that steadfastly refuses every gratuitous impulse.  This is independent filmmaking that punches way above its weight, and it earns every ounce of its very considerable suspense. Though we know that the troubled drifter with the scarred head can only bring discord, Redford constructs the film's exceptional tension with surgical precision. We cannot help but feel compassion for Sherman, but Redford's ability to counterbalance this with the particulars of how and when things go wrong, and from Sherman's very peculiar logic, is delightful.  If you're looking for a festival taste of splatter-spiced adrenaline, 13 Assassins offers a feast of samurai bloodletting that will soak your popcorn bright red, but for tender, juicy, slow-cooked adrenaline, Oliver Sherman is a high point of TIFF's 2010 menu.