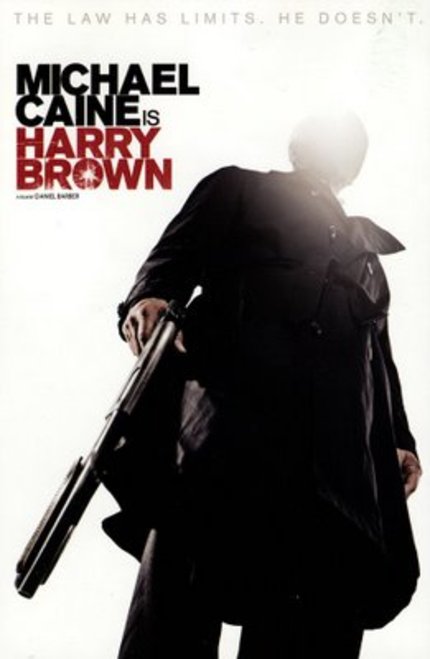 When I heard everyone's favorite butler was going to star in a revenge flick I wasn't immediately interested. Not that Harry Brown seemed like a bad film, just not a very interesting one. Good reviews and critiques kept pouring in though, so I finally caved in and sat down to give it a try. It's a good thing I did as behind its somewhat barren facade lies an intriguing film that deserves a wider audience.

Harry Brown plays like a mix of The Limey and Eden Lake, putting together the old man's revenge theme of Soderbergh's beauty with the troubled kids terrorizing the good-natured British citizens. Ye older readers might refer to Harry Brown as a Death Wish clone, I just can't stand to make that comparison purely based on the quality of this film. Whatever you prefer though, revenge is what this film is all about, revenge is what you'll be getting.

Harry Brown is an old man. His life is a string of routines and mannerisms, plagued by a sudden loneliness due to the hospitalization of his wife. She's fallen victim to meaningless bullying by some youngsters in the neighborhood and pays for the incident with her life. Harry is robbed from his life companion for no good reason at all and has quite some trouble coping with his new life.

Not much later his only remaining friend dies at the hands of the same juveniles. Harry finally snaps and decides the police just isn't worth counting on. He sets out to destroy the group of kids terrorizing his neighborhood (more specifically, a pedestrian tunnel not unlike the one in Irreversible), creating quite a fuzz along the way. It's a pretty typical tale of revenge, but a bit more grim and realistic than you might expect at first, especially the first part of the film.

From the very start Barber puts a gritty layer on top of the film. Slightly grainy, meticulously planned and often wooingly attractive, the visuals really help in setting the tone of the film. The result is edgy but stylized and much needed to pull you through the flimsier parts of the story. Suspension of disbelieve is often aided here by a visual tour de force to take the mind of some of the more far-fetched elements.

The music is equally strong. Brooding and dark, it makes the film even grittier. The soundtrack may not be very catchy or in your face but the effect it has on the atmosphere is hard to miss. Acting is strong too, with a reborn Michael Caine taking up most of the screen time. A solid actor with a superb voice talent. The group of British youngsters is impressive too, daunting and evil, making their presence fearful and believable. Total creeps that deserve a good bashing.

Nearing the finale the story goes a little overboard, but by that time the atmosphere has settled quite nicely and the few leaps of faith that are required from the audience are easy to bridge. There isn't much morality or hidden meaning in Harry Brown which might be a little surprising after the downplayed first part of the film. By the time the end credits roll over the screen, it's obvious Harry Brown is all about revenge with little else on its mind.

Harry Brown has quite a lot to offer. Visually strong, aided by a great soundtrack and a more than solid cast, it's a grim film that presents itself way better than most of the competition. It's rare to see this combination of solid drama and over the top revenge themes in one film, let alone a working combo, but Barber pulls it off with such ease that I'm already looking forward to his next film. Definitely recommended.