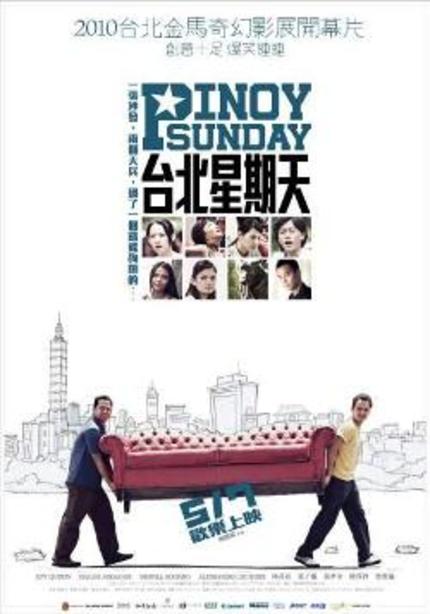 PINOY SUNDAY is not a typical Taiwanese film. Firstly, it plays out primarily in Tagalog, with only occasional snippets of dialogue spoken in Taiwanese, Mandarin or English. Secondly, it maintains a fairly light-hearted tone, telling a simple story of Filipino migrant workers without feeling compelled to get bogged down in social commentary or berate the injustices of an unfair society. Instead, Malaysian-born writer-director Ho Wi Ding lets his film ride for the most part on the shoulders of his two lead actors - Jeffrey "Epy" Quizon and Bayani Agbayani - a task they effortlessly accomplish through their natural charisma and frequently hilarious onscreen chemistry.

Dado (Agbayani) is living a lifestyle endured by migrant workers the world over. He has left his wife and young daughter back in The Philippines to come to Taipei and work on an assembly line. He sends as much money home as he can to provide his loved ones the best life possible, even if he's not there to share it with them. And that's the problem. Dado's been away for so long that he has, despite himself, begun a relationship with Anna (Meryll Soriano), who works as a domestic helper.

Manuel, on the other hand, is a carefree romantic with no such family ties or financial responsibilities. He's a good-looking guy and applies his energy to chasing girls, although his latest target - club singer Celia (Alessandra de Rossi) - is proving frustratingly nonplussed by his advances. Dado and Manuel both live in a dormitory provided by their employer, but it upholds a strict curfew, keeping them indoors for most of their free time. Manuel dreams of furnishing their rooftop hangout with a sofa, where they can drink beers under the stars and shoot the breeze - but neither of them can afford such a luxury.

On their day off, however, the pair happens upon a recently discarded sofa sitting outside an apartment building and, although many miles from home with no means of transportation, they commit themselves to hiking it back to the dorm. And so begins a hilarious journey, brimming with incidents and pitfalls that over the course of the day will push Dado and Manuel's friendship to its breaking point.

The set up for PINOY SUNDAY couldn't be simpler, yet time is spent in the opening act to fully develop the four central characters, detail their relationships and goals, so that there is always more at stake than simply a desire to sit more comfortably. The baking heat, the busy weekend traffic and the very cumbersome nature of the sofa itself work against Dado and Manuel, but they remain resolute - or at least Manuel does - that before the day is out - or rather, before curfew is called and they are locked out of the dorm - they will get the sofa home.

This is a film that lives or dies by its two central actors, and fortunately for Ho, Quizon and Agbayani are more than up to the task. Both are familiar faces on the big and small screens back in The Philippines and give wonderfully naturalistic performances here. Quizon in particular is all cocky charm and naïve enthusiasm that plays beautifully against Agbayani's more cautious and world-weary straight man. For of course, if they get in trouble the pair will be deported, which while no great loss for Manuel, would be a financial catastrophe for Dado and his family.

Charming, effective and with a breezy air of joie de vivre, PINOY SUNDAY is a delight from start to finish. Like its characters, it is a film of simple tastes and manageable ambitions, and Ho, together with co-writer Ajay Balakrishnan, does a grand job of telling a very particular story in a way that speaks to us all, regardless of our nationality or background. We all have our commitments and burdens, our temptations and struggles, our friendships, passions and dreams. In short we all have our sofas to carry, but what is important is that we know when to lift, when to push and when to just sit down for a moment and catch our breath. PINOY SUNDAY articulates this beautifully.

Do you feel this content is inappropriate or infringes upon your rights? Click here to report it, or see our DMCA policy.
Wi Ding HoAjay BalakrishnanBayani AgbayaniJeffrey QuizonNor DomingoDave Ronald ChangComedyDrama