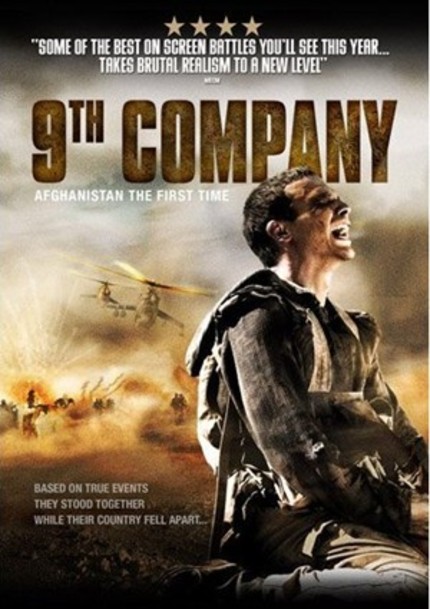 Sweeping, big-budget war films are a tricky proposition in this day and age--if they aim for action/adventure audiences, they risk being perceived as glorifying combat. If they instead position themselves as serious-minded social/political dramas punctuated with the occasional bloody interlude, they're in danger of seeming preachy or heavy-handed. Which makes director Fyodor Bondarchuk's achievement in 9th Company, a 2005 release which is only now enjoying a R1 DVD bow, all the more impressive.

Avoiding the temptation to over-sentimentalize his young Soviet soldiers or to demonize their Mujahideen adversaries, Bondarchuk nonetheless crafts a muscular film that skimps neither on pathos or action, but never feels like its indulging in them to make easy points. Make no mistake:  this is not an art film, nor does it share much with the moralism of Platoon or the subversiveness of Full Metal Jacket, two obvious titles for comparison. Instead, Bondarchuk shoots for a straight-ahead "based on true events" war film that, yes, has its exaggerated moments and operatic gestures (especially near the end), but works hard to earn our respect and ultimately does so through its combination of restraint and thoughtfulness.

For First World audiences, the well-researched and authentic-feeling 9th Company is something of a revelation in terms of its coverage of the decade-long Soviet-Afghan conflict--it represents the other side of Charlie Wilson's War, literally. For the Russian audiences that quickly made it the highest grossing post-Soviet film, 9th Company appears to have provided nothing less than full-blown catharsis, and it's in this way, culturally, that the analogy to Platoon makes the most sense. After all, while it's one thing to be a forgotten hero on the losing end of a thankless war, it's probably quite another if the nation you fought for itself basically ceases to exist a couple of years later. So purely as a project of historical reclamation, the film is consistently fascinating. Add to this Bondarchuk's strong storytelling and stellar production values throughout, and you've got a key work from a major filmmaker that's well worth catching.

True, 9th Company does display some of the common (inevitable?) tropes of the genre--the throwing together of those with diverse socio-economic backgrounds, the plight of "sensitive" recruits, an over-the-top drill sergeant--but Yuriy Korotkov's solid script manages to keep these as tropes rather than out-and-out clichés. Besides, the information-rich extras provided in Well Go USA's 2-disc Special Edition DVD show that some of these apparent flights of artistic license are in fact reality-based. There actually was a young woman who, er, supported the troops in her own memorable way. And the newbie who brings his watercolors to the front lines? When he holds forth on the "beauty" of war, we admire the intelligence of the script but can't help but look askance at the highbrow artifice of such a character. Yet on the DVD extra that focuses on first-person accounts of the war, we actually meet a painter-veteran who must have been the model for this character. (Note: while all the DVD special features are worth checking out for their content, especially the featurette that shows the impassioned director exhorting his actors to "grab the soil" while shooting one rough-and-tumble scene, the quality of presentation is inconsistent. For example, we get a nice, heartfelt interview segment from Bondarchuk's mother... but then it's edited in such a way that she starts to repeat herself, as if someone couldn't figure out which take to use and so decided to use all of them.)

One way that the DVD is being marketed concerns the relevancy of its storyline to the U.S.'s current military action in Afghanistan. For me, though, the parallel is too obvious to be truly interesting, especially given that 9th Company was neither shot "in country" (much is made of the unconquerable terrain) nor spends more than a couple of scenes on the Afghans themselves (much is made of their indomitable spirit). Moreover, despite some brief, nonjudgmental (but intriguing) clash-of-civilizations material, the screenplay largely steers clear of overt politics, both domestic and world. But to its credit, this doesn't feel like some sort of cop-out. Rather, the viewer accepts the relative absence of the political because of the historical context--there simply was no loud, widespread culture of dissent in the Soviet Union, so for Korotkov to retrofit the characters with their own heated agendas/debates would have felt forced to say the least.

Instead, while there's certainly plenty of potential fuel for Russian patriotism here (see the extra about the film's premiere), the writer and director takes pains to avoid simple jingoism. These young guys get shipped to Afghanistan simply because they're told to, and they go along with things without ever questioning them too much--which is one of the tragically heroic aspects of any war. So don't expect All Quiet on the Western Front either, although 9th Company does share something of its elegiac tone:  this film isn't about the heartbreak of youth being misled by propaganda to fight for the glory of their homeland. Rather, it follows the moral imperatives of Sergeant York--at first you may think you're fighting for your country but soon enough you're really just fighting for the beloved comrade in the trench next to you--and in this respect 9th Company takes its place in what has become a classic, if paradoxical, tradition:  the rousing war flick that can also be appreciated as an anti-war statement.