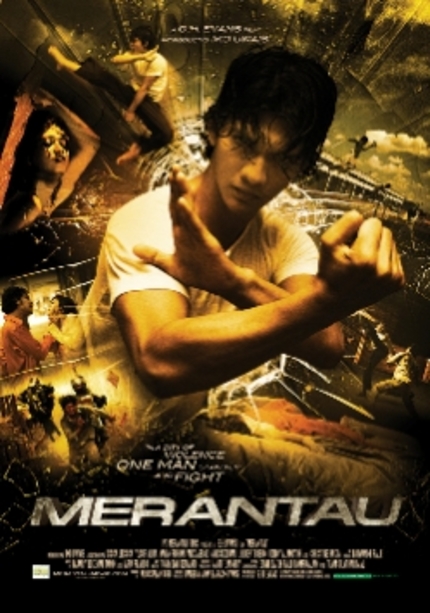 [Our thanks to Lauren Baggett for the following review.]

There's a remarkable moment in the midst of the knock-down, drag-out climax of Merantau, after our hero and the two main villains have fought long, hard, and dirty for several minutes. Temporarily overwhelmed by their injuries, they collectively collapse on the ground, and stay that way for several quiet moments. Where other films would play this for laughs or fill the silence with awkward dialogue, Merantau lets the scene play out just long enough for the characters (and the audience) to get their breath back before the fight begins again in earnest. It's choices like these that makes Merantau a welcome and unique addition to the action genre. It's also ridiculously fun to watch.

Shot and set in Indonesia, Merantau follows our protagonist Yuda, a country boy who is about to set out into the world as part of a rite of passage known in his small mountain community as Merantau. He hopes to be a teacher of Silat, the gorgeous fighting style that we're treated to later in the movie. Once in Jakarta, however, Yuda realizes that the big bad city is even bigger and badder than he's imagined. The teaching job never materializes, and the building he was supposed to live in has been torn down, forcing poor Yuda to take refuge in a construction site. To make matters worse, he soon gets tangled up in the plight of tiny pickpocketer Adit and his plucky sister Astri when he witnesses Astri's go-go club boss roughing her up. It is against Yuda's nature not to intervene, and the resulting scene is the first of many just plain awesome fights, with Yuda easily emerging triumphant. While Adit is immediately pleased with their new protector, Astri responds to Yuda's actions by yelling at him for losing her a perfectly good (albeit slightly sleazy) job. She does warm up to him with time, and good thing too, because the spurned boss has a boss of his own, a slimy European who deals in sex trafficking, and they seem to be one girl short of their shipment. Yuda is soon forced to fight for Astri's freedom with everything he has as his confrontations with the villain and his endless henchmen grow more and more arduous.

The action scenes, of course, are where the film really sings. Several sequences garnered enthusiastic audience applause, a standout being a fight between Yuda and several thugs on a bridge. With Adit under his arm, Yuda manages to effortlessly lift the boy out of harm's way while dealing out some serious, lighting-fast damage to their attackers at the same time. It's a joy to watch, and a good deal of the action scenes in Merantau are equally delightful. When the film shows us a glass table, knowing that someone will get propelled through it in the next minute isn't a bad sort of predictability, but rather a gleeful understanding between the movie and the audience. 'Our hero is going to throw a baddie through this glass table', we're being told. 'You know it's gonna happen, we know you know it's gonna happen, and it's awesome, isn't it?' And indeed it is. Much of Merantau plugs along with a level of genre savvy that never condescends and nearly always satisfies. The film knows what we like, and is more than happy to give it to us in spades.

Iko Uwais, who plays Yuda, has a bashful demeanor when he isn't kicking thugs in the head. His sweet nature means that we don't get many witty one-liners or displays of attitude, but there's nothing wrong with a mild mannered guy as our avenging protagonist. The youngsters who play the imperiled Adit and Astri are sufficient for their roles, though Astri is often too passive for the pluckiness her role calls for. Mads Koudal as our sex slaver villain is the true standout in the cast. Unafraid to chew on the scenery, Koudal spends a lengthy scene ranting and frothing about how his minions need to catch Yuda or there will be Hell to pay, all while pieces of a broken bottle are protruding from his face. Every once in a while he'll stop to pull a particularly bothersome shard out, but for the most part they remain. The result is absurdly funny, and needless to say, the audience absolutely ate this up.

The film does jerk along a little awkwardly until our hero gets to Jakarta. While it's important to establish the culture that Yuda is coming from and how important it is to him, this could have been easily conveyed to us in half the time, getting us ever closer to those tasty scenes of mayhem. Also, (and MODERATE SPOILER ALERT here, so be warned), the scene late in the movie that reveals that Astri has been raped by the villain while in his clutches was abrupt and unnecessary. We've spent the whole movie knowing that the villains are dastardly sex traffickers, and that Astri values her purity. The scene manages to be non-exploitative, as we're not privy to the rape itself,  but it still sits strangely within the context of the rest of the film. There wasn't enough resonance in the scenes that followed for this plot point to really work in the way it was intended.

All in all, however, Merantau is fun to watch, especially experienced with an audience of like-minded action fans. It may not be perfect, but it doesn't need to be if you're in the right frame of mind to appreciate what the movie has to offer.