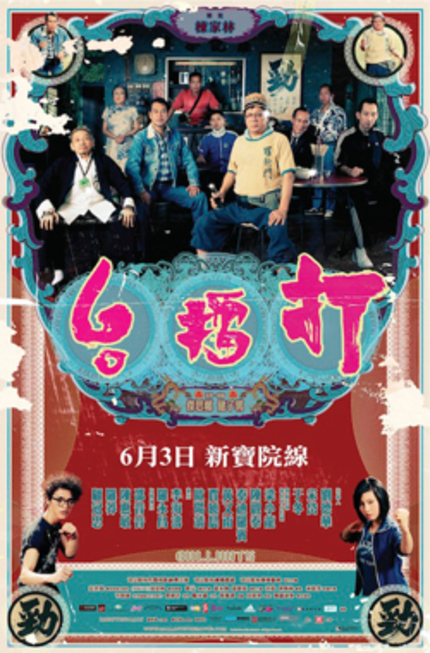 [There are a number of reviews of GALLANTS in the archives, feel free to browse,  and since it is playing on the big screen at Fantasia, here is Stefan's take on the film]

Of all the films that I've watched during the festival, Gallants gets my vote as my personal favourite because it's witty, hilarious, intelligent, has plenty to offer fans of Hong Kong martial arts cinema of the yesteryears, great production values, and having action sequences that will just blow your mind away since it comes hard hitting and sans gimmicks, something which is sorely missed. If I can use one Cantonese word to describe the film, that word will unquestionable be Jheng (Awesome)!

Produced under Andy Lau's Focus Films with actor Lau Kar Tung on board as producer, directors Clement Cheng and Derek Kwok have a winner on their hands, as they exalt the spirit of what it means to never give up when the odds are stacked against you, and in some way live up that spirit of theirs when they had embarked to make this project which had clear risks. It will be extremely foolish to dismiss the film outright just because it has more elderly actors than youthful ones to draw the crowd, because as the adage goes, the oldest ginger is still the best, and this film is a testament to that. Look closely and you'll see the sheer amount of veteran, legendary talent even, assembled who hail from the Shaw Brothers kung fu film era, with even the opening credits with the silhouette fights, and the way characters are introduced, paying certain homage to an era bygone.

In essence, this purely Hong Kong film is an allegory of sorts to its peers in the market, where packaging and marketing are seen to be the be-all-and-end-all, rather than to rely on hard work to hone talent, or to compensate for the lack thereof. It tells of a people's indomitable spirit of not backing down, and to keep one's chin up in the face of tremendous competition, to work at what they are good at, and all will likely and hopefully be well.

As the story goes, we follow the adventures of Cheung (Wong You Nam), a lifelong loser who gets bullied from the get go in his life, and gets sent by his real estate company to a remote town to assist in acquiring leases from the townsfolk so that redevelopment works can start. Naturally he gets bullied, and gets rescued by the mysterious Tiger (Leung Siu-Lung), a disciple of the once great Master Ben Law (Teddy Robin) of the Gate of Law martial arts school, who has been in coma for the last 30 years. And it seems, like in Stephen Chow's Kung Fu, this small town hides a lot more martial arts exponents, such as Law's other disciple Dragon (Chen Kuan-Tai), who together with Tiger had tried their best to keep their Master's place alive by converting it to a Teahouse, while awaiting their master's recovery.

Then there's Kwai (JJ Jia), the pretty lass who also hangs out at the Law's teahouse. Their collective backstory is something that got delivered through a fantastic animated sequence, and animation is something that gets peppered throughout the film as well when it gets down to fight sequences when deadly bone crunching blows get delivered. Since the film has in its plot the advent of the Hong Kong Martial Arts Open to seemingly promote the spirit of martial arts, as announced by rival and owner of a flashier sports club Master Pong (Chan Mai Wan), one will expect some spectacular kung fu action. The film more than delivers in this aspect, with the action choreographed by the renowned Yuen Tak, who cleverly did away with fancy wire-work, offering instead sparring sessions which are realistic and extremely riveting to watch, as the actors (most of whom have so many years of experience) put together some credible and exciting martial arts moves for the screen. Editing is also wonderfully done so that we get the best views at the front seats of a bout without the usual MTV-styled quick editing nonsense. I guarantee no matter how many martial arts films that you've seen, the ones here as choreographed will still blow your mind away.

Like a Crouching Tiger and Hidden Dragon itself, if you do not buy the first act, then wait for Teddy Robin, who single-handedly stole the show right out from everyone's noses. His comic timing is perfect, and the lines that he has, sheer wit, coupled with the fact that his character's disorientation after being out of action for so many years, is something that offers rip-roaring laughter. The directors, who co-wrote the story with Frankie Tam, breathe so much life into Master Law, that you can't help but on one hand be amazed by his crazy philosophy, and on the other just laugh at it, such as his proclaimed laws of combat in the order of Guts, Power and Skill, the rationale in his disciple recruitment strategy, and chiefly, that the reason to learn Kung Fu is to fight, not exercise - which has other, better alternatives. Robin, who also contributed to the movie's music, fills his character with so much youthful energy and exuberance, makes this one of his more memorable roles that he has tackled, and left everyone in the cinema crackling with glee each time he turns on his wit.

As the film explains early on, the boxing ring is a symbol of dignity and fame, and there can be only one victor and one loser. Clearly, Gallants is a winner in my books, and delivers knockout blow after knockout blow without relent. I had gone to Hong Kong with a mission to watch Hong Kong films, and this one clearly made my trip worthwhile many times over, coupled with so many hilarious moments to laugh along with. I hope it gets to spread its wings far and wide, so don't miss this when you get the chance to catch it on the big screen. Certainly one of the best I've seen this year!