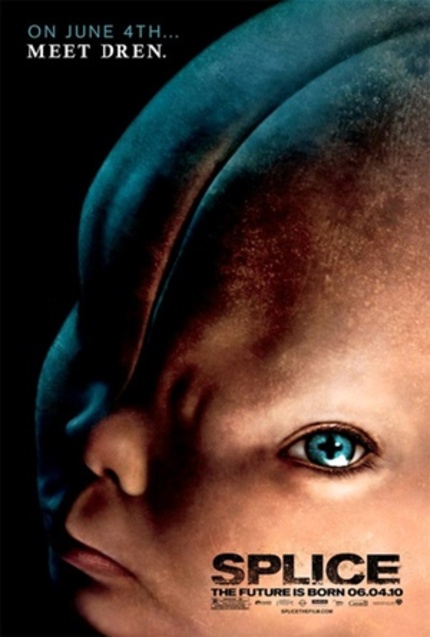 The genetic experimentation-based premise of "Splice" may brand the film as a ripped-from-the-headlines thriller, but don't be fooled. "Splice", a taut and effective modern horror story, is actually about overly controlling parenting, and the consequences thereof. Despite its less than stellar trailers that managed to unintentionally sell it as something derivative of the 1995 exploitation dud "Species", "Splice" manages to correct just about everything that film did wrong. Driven by the on-screen talent of ever-quirky Oscar winner Adrien Brody and indie film darling Sarah Polley, what we have here is a top-tier, edgy character-based revision of the classic "Frankenstein" story. It is also one of the biggest surprises of the movie year so far.

Directed with fluid sure-handedness by Vincenzo Natali (of "Cube" fame; also co-writer of this film's screenplay), "Splice" is never dull, and is almost always fully engaging, even if most of the scenes take place in sickly-lit science labs or a rustic barn, and we know full well that this cannot end well. Brody and Polley play Clive and Elsa (a blatant "Bride of Frankenstein" reference right there), a gene-splicing couple, each with their own distinct set of personal control issues. They are on the cusp of a major scientific breakthrough, and the future is looking bright. Consequently, they are starting to think about having children.

Elsa's personal baggage, however, seriously skews her thoughts on the matter to something altogether unconventional. They secretly create Dren - an all in all new female creature - by splicing forbidden human chromosomes into their already successful mulligan stew of animal chromosomes. Of course, between their need to hide Dren from the world, as well as Dren's own unknown animal/human attributes, and their own serious, serious issues involving not only parenting but the good old moral limits of science itself, Clive and Elsa's makeshift venture into child-rearing quickly becomes a complex and overall disturbing journey.

Although perennial Hollywood hit makers Joel Silver and Don Murphy are listed among the executive producers (so is Guillermo Del Toro, for good measure), don't for one minute assume this to be another warmed-over mainstream cautionary tale. Cautionary though it may be, this is a film with a multifaceted leading couple, which we are somehow able to simultaneously relate to and despise, root for and detest. By the time the brisk finale has come and gone, audiences are left still reeling from at least one massive "holy crap!" moment of horrible, almost unbelievable moral line-crossing rooted in inner psychodrama gone wrong.

"Splice" takes full advantage of its own major studio pedigree and budget, earning its edge over much of the current horror movie competition, thanks to its impeccable production values (including effective but unobtrusive special effects makeup by Gregory Nicotero and Howard Berger), spot-on directing, and exceptional performances. As opposed to most large-scale Hollywood horror efforts, this one is a rare case study in how to do it right.

"Splice" is not afraid to momentarily embrace its inner creature-feature hokiness, and equally unafraid to take its characters and viewers alike to some terribly disquieting places. (This is a good time to point out that this is not a film for the squeamish.) There is little doubt that miners of films that involve ultra-modern ethical and moral cultural situations will be chewing on this one for some time to come. But in the end, it's essentially a classical tale of two people and their twisted needs for control. In a movie year that is yet to yield any clear grand slams, "Splice" perhaps shockingly, stands at the top of the expanding heap.