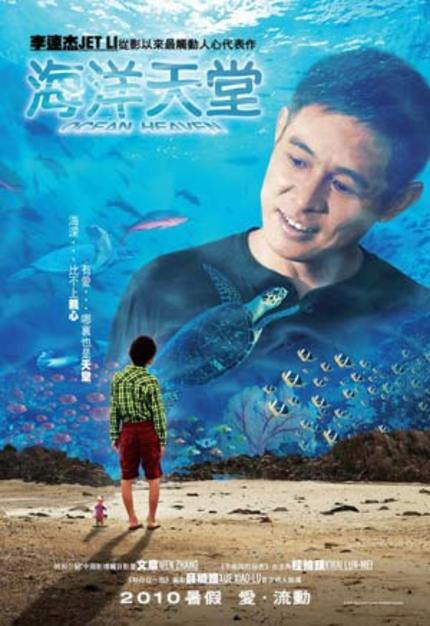 Yep, you read the headline correctly.  In the upcoming Chinese drama Ocean Heaven (海洋天堂), action star Jet Li will perform no martial arts whatsoever.  On the contrary, Li took a pay-cut to his usual high salary for a rare opportunity to stretch his acting chops as a terminally ill father seeking the means to ensure the well-being of his autistic adolescent son.  The heartwarming film marks the directorial debut of Xue Xiaolu, the co-scriptwriter of Chen Kaige's Together, a drama similar in the father & son theme.  Here's the official synopsis:

One person out of every thousand is born with autism. It follows that China has over one million autism patients. David (Wen Zhang) is one of them: he looks absent-minded, repeats other peoples words, swims with amazing ease, keeps everything at home in exact order and maybe he is not totally aware of his mothers death some years ago. Working in an aquarium, Sam Wong (Jet Li) takes tender care of this twenty-two-year-old son of his. With the generous help of the neighbors, the two live happily together. Yet, the father understands very well that in the end, he will have to depart from the world, leaving his son alone and that day will come sooner than everyone is ready to believe.

This film is an ode to a father who is determined to find shelter for his son before it is too late. In the process, the boy achieves a measure of independence necessary for both to let go.

Do you feel this content is inappropriate or infringes upon your rights? Click here to report it, or see our DMCA policy.
Xiaolu XueJet LiZhang WenLun Mei GweiYuanyuan ZhuDrama