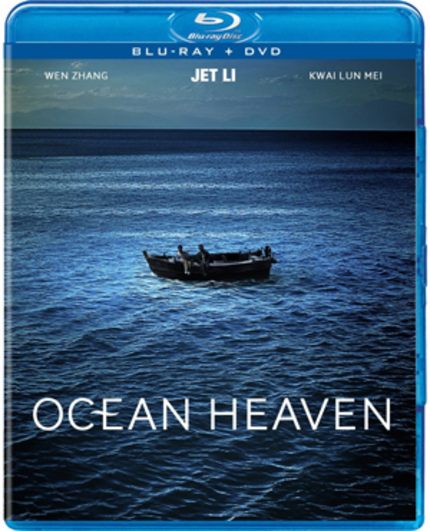 Ocean Heaven is not the kind of film I normally go for. This film is a tearjerker, the kind of film that would have my wife weeping openly at the predetermined beats, just as the director intended. I tend to rebel against those sorts of films, and try my hardest to stay away from them, however, Well Go USA sent me the film on Blu-ray, so here I am reviewing it. I heard about Ocean Heaven when it screened at NYAFF last year, and the big buzz was that it's Jet Li's dramatic turn that sells the film. There are no flying kicks or rapid fire punches here, just a lot of heart and Jet Li playing very against type. What can I say, the goddamned film worked on me. I was on the verge of tears on more than one occasion, and this is one that hti me really hard.  Is it manipulative? Yes, it is, but what film isn't? All films are designed to garner a reaction from their audience, and this one succeeded with me. I can't say that it will succeed with everyone, but if you're susceptible, you might wanna grab a hankie.

Jet Li plays Wang Xingchang, a middle aged widower with an autistic son. Before the film begins, Xingchang discovers that he is terminally ill and only has a little while to live, thus begins his quest to make sure that his son is taken care of properly when he's gone. It is a heart-rending thing to watch as Xingchang takes his son, Dafu, to everyone who has helped him in the past in his attempts to find Dafu a place to go when he is gone. He continually comes up empty handed when he learns that his son is too old for a foster home and too young for an old folks home.  The idea of leaving his son alone tears at his soul, in some cases forcing his emotions to the breaking point when he tries to instruct Dafu to perform simple everyday tasks which he has trouble accomplishing.

As a father, and I've mentioned this before, there is nothing more important in my life than leaving my son better off than I was. I want him to be cared for and loved even when I'm gone, and I want to teach him to take care of himself. I can only imagine the turmoil than Xingchang goes through with not only leaving a son behind, but one who is largely incapable of caring for himself. Watching Xingchang's everyday struggles to not only care for his son, but also to prepare him for a life without his father, is a tough thing. There is a feeling as the film begins that Xingchang's reactions to his son's autism are over the top and antagonistic, but it becomes apparent rather quickly that he is simply scared, and his reactions and lashing out are a result of that fear that he won't finish Dafu's preparation in time, as if he could ever do enough.

Dafu is played with surprising aplomb by Wen Zhang, who overcomes the temptation to ham it up, and plays Dafu for the charming, gentle boy that he is. The film business is notorious for making a mockery of developmentally disabled people, but this performance was very impressive, almost as much as Jet Li's low key, and nearly unrecognizable, turn as Xingchang. These two characters play marvelously against one another, and the supporting cast is wise enough to mostly stay out of the way, as they are really just set dressing, and not much more. The performances help to make this film as remarkable as it is. Jet Li has been talking about retiring from wu xia films for a while, and that is a troubling thought to many of us, but he's shown with this film, and a few others in the past, like Unleashed (Danny the Dog), that he has some dramatic chops, and it is always nice to see that the people we've come to love probably won't embarrass themselves as they age.

My initial impulse upon reading the synopsis for this film and listening to some of the reviews was the dismiss it, however, I feel that my own personal experiences have helped it to reach me in exactly the way it was intended. This goddamned movie pushes every one of my goddamned buttons about being a father and what it means to prepare a son for life, only in this case, that preparation is far more compressed, and the end far more real. Ocean Heaven isn't for everyone, and it really isn't the type of Chinese film we usually spend a lot of time on, but if you don't mind a bit of melodrama and tear-jerking, I think there is something to be gained from this film. If you have some kind of idea what you're going into, this can be a very humbling experience in a good way. Recommended.

Well Go USA's track record is pretty damned good, and this disc won't upset that streak. The film isn't particularly flashy, but it looks good.  One thing I was surprised to notice in the credits was that it was shot by Christopher Doyle (Chungking Express, Underwater Love, Etc...) but it looks nothing like any Doyle film I've seen. The photography is rather flat and unmemorable, apart from an opening sequence underwater, but I suppose it works for the film. The audio is similarly unremarkable, there is no action to speak of, but the audio is nice and clear and the dialogue is easily audible, so thumbs up on that.

There is only one significant extra on the disc, and that is a brief making of segment. This shares about fifteen minutes of behind the scenes footage mixed in with interviews of Jet Li, Wen Zhang, and director Xue Xiaolu. Nothing earth-shattering, but nice to get their voices heard on why the film exists, and apparently it was a long time in the making, a passion project for the director, and it certainly feels that way.

I really connected with Ocean Heaven, though I can see it not being for everyone.  In fact, our man in Hong Kong, James Marsh, told me that he didn't like it at all.  I think it's because he has no soul, but whatever, this is my review, and I recommend it for someone looking for a break from kicks to the face every once in a while.

Do you feel this content is inappropriate or infringes upon your rights? Click here to report it, or see our DMCA policy.
Xiaolu XueJet LiZhang WenLun Mei GweiYuanyuan ZhuDrama