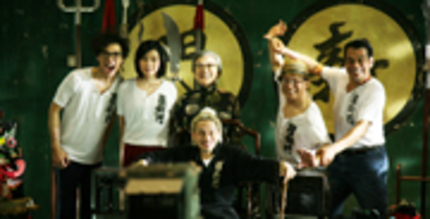 There's no school like the old school, they say. You would be hard pressed to find a ScreenAnarchy writer who doesn't pine for those golden days of cinema to return to HK and it looks like Derek Kwok and Clement Cheng share the same sentiments as we do. They've co-directed a throw back to those classic kungfu films called Gallants. The film premiered at HKIFF in March and is set to open in HK in June.

An exhilarating homage to Hong Kong's action star of yesteryear and Hong Kong cinema's action comedies, Gallanats sees two have-been masters Leung Siu-lung and Chen Kwun-tai holed up in a village restaurant, tending their master in a coma. Trouble arrives in the form of a gang of roughs - diplomats of ruthless developers drooling over their property. The master wakes up with a start, and kick starts the old boys into action for home and country. Director Derek Kwok has reinvented a great sub-genre with aplomb and an eye on new horizons. HKIFF official site

You can find the kind-of trailer after the break. It's not really structured like a trailer. More of a showreel, really. But still, that's some good old fashioned kungfu going on in those 46 seconds. It makes us happy boys indeed. And be sure to read Ioncinema's interview with Kwok and Cheng.
Sign-In to Vote
Tweet 0 Submit

I was gutted to miss this at HKIFF as those who saw it said it was one of the best things they saw. June can't come fast enough.

this cannot arrive any sooner...