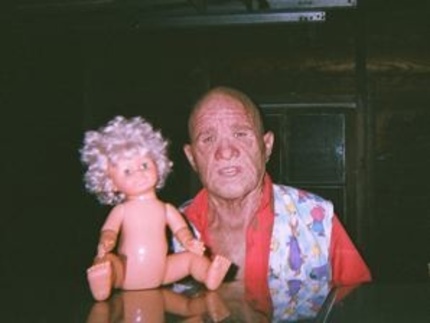 SXSW 2010 wrapped up what turned out to be a rather light North American festival run for Harmony Korine's Trash Humpers. Now, venerable indie record label Drag City is set to bring the film to a broader audience by handling its U.S theatrical release. The synopsis is as follows:

TRASH HUMPERS follows a small gang of sinister, creepy 'elderly' peeping toms through the shadows and streetlights of a familiar suburban landscape. They drag baby dolls around on bicycles, bust television sets with hammers, slap big fat BLANK while proudly chomping down on stogies, and yeah...they do some trash humping too. Their behavior makes for viewing that is as compelling as it is unbearable - images that, in classic Korine style, scorch themselves on yer mind's eye, leaving you squinting for the foreseeable future.

The film will initially open in New York on May 7th and Los Angeles on May 14th. Dates in about 15 other cities have already been booked late into year. The new Trash Humpers web site has the details on the other venues.

Do you feel this content is inappropriate or infringes upon your rights? Click here to report it, or see our DMCA policy.
Harmony KorineRachel KorineBrian KotzurTravis NicholsonDrama