Meet Robert Carlyle, Father And Spy In Justin Kerrigan's I KNOW YOU KNOW 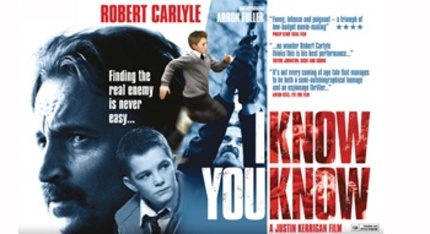 New from the director of the greatly acclaimed Human Traffic, upcoming UK effort I Know You Know is a bit of an odd beast. Equal parts action-thriller and family drama, the picture stars Robert Carlyle as the loving father of a young son. And also an on-the-edge secret agent. These things do not mix easily.

Robert Carlyle (The Full Monty, Trainspotting) is Charlie, a highly charged individual on the edge. He's an undercover agent, always on an important mission, always on the move. Jamie (Arron Fuller), his son, is fascinated by his father's espionage work until the world of spies becomes all too real. Charlie is unpredictable and explosive, yet kind-hearted and fiercely protective of his Jamie who hero-worships him.

With a UK theatrical release coming in early April, the full trailer for this one has just arrived and it looks very good, indeed. With Carlyle in the lead we can at least be assured of some very solid acting.  Check it below.

Do you feel this content is inappropriate or infringes upon your rights? Click here to report it, or see our DMCA policy.
Justin KerriganRobert CarlyleArron FullerDavid BradleyClaire CageDrama