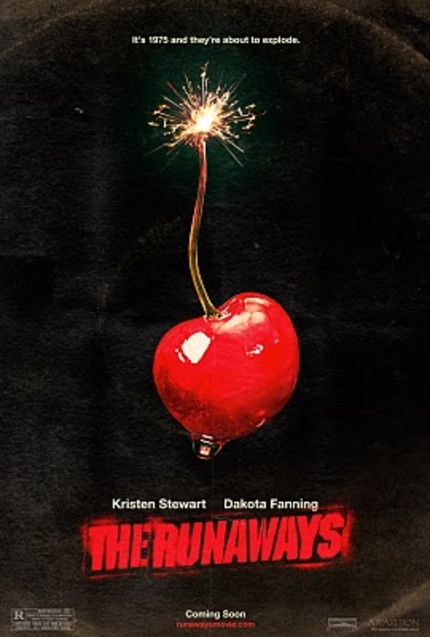 (Our thanks to ongoing contributor, Dustin Chang for the following review.)

Based on the memoir Neon Angel: The Cherie Currie Story and executive produced by Joan Jett, this all-girl rock band biopic hits all the right notes in all the right places.
Floria Sigismondi, a Canadian music video director (for Marilyn Manson, Sigure Ros, White Stripes, etc), knows how to lure the audience in from the get-go: the film starts with skimpily dressed, beautiful blond sisters Marie (Riley Keough) and Cherie Currie (Dakota Fanning) exchanging their underwear at a gas station bathroom because Cherie's period has just started. It encapsulates the theme of the film in such a short time - sisterhood, by and large.

It's Los Angeles circa 1975 and Sigismondi does a great job capturing the tail end of the glam rock era and dawn of disco.
Tomboyish teen with shaggy jet-black hair and a black leather jacket, Joan Jett (Kristen Stewart) somehow manages to convince a lipstick wearing opportunistic music producer, Kim Fowley
(Michael Shannon) to give her a chance at an all-girl rock band. He knows what's good when he sees it. He recruits Sandy West the drummer, Lita Ford on lead guitar and Robin (fictional character) on bass. With these feline punkettes with their 'f-you' attitudes, he announces eloquently "What this group needs now is more sex" as he points his finger at a woman's crotch in a magazine. After he picks up Cherie at a club to be the lead singer of the Runaways, he asks for her age. "Fifteen," she says, and Fowley breaks out a menacing smile, shouting "Jailbait!" He makes the girls go through sort of a rock 'n' roll boot camp to toughen them up but Cherie is a young, sensitive glam kid who dons David Bowie jump suit with Aladdin Sane makeup and lip syncs to him at a high school talent show. She even likes to listen to Don McLean's American Pie from time to time, for crying out loud. It's going to be a rocky ride.

Kristen Stewart axes her image as an angsty teenage vampire lover and gives a no frills, nuanced performance as a tough as nails but well rounded Jett. As she growls on stage and plays guitar, Stewart is utterly convincing as a determined teenager who is destined to be famous. But it's Dakota Fanning who steals the show as she embodies that unreachable, vacuous glam rock waif who stumbles upon the scene and has a hard time dealing with the rock 'n' roll lifestyle. Joan is in many ways Cherie's surrogate older sister while they are on the road. And Sigismondi is not afraid of suggesting their sexual affairs as well. Michael Shannon, again, proves here to be one of the most gifted American actors working today. His manic performance as a larger than life Fowler rivals his performance in William Friedkin's Bug as a psycho conspiracy theorist and in Werner Herzog's recent My Son, My Son, What Have Ye Done as a schizophrenic stage actor who takes his pink flamingos hostage.

In the end, sex, drugs and being constantly on the road prove to be too much for young Cherie to handle. Despite its edgy subject matter, The Runaways is a sweet movie about young girls' rites of passage. As they go their separate ways, their reminiscence has no bitterness to it. It almost has a fairy tale quality rather than the cynicism of its 80's counterpart, Ladies and Gentleman, the Fabulous Stains by Lou Adler, starring baby Diane Lane and Laura Dern.

This special preview screening was a part of Fusion Film Festival: A Celebration of Women Filmmakers. Joan Jett was there for the Q & A session packed mostly with female audience. Now 54, with a petite, athletic body and trade mark short black hair, Jett talked about the surreal nature of seeing her life on film and being a rock idol, she came across as personable, intelligent, and guileless. She also told the audience that Cherie Currie has become a well-known chainsaw sculptor and she is apparently very good. With Cherry Bomb continuously playing in my head like a broken tape, I exited the theater pondering on the harmonious relationship between rock 'n' roll and chainsaw.

Born in Seoul, Korea, Dustin Chang is a writer and filmmaker currently living in Brooklyn, NY with a wifey and two cats. See more from him at: dustinchang.com aka Floating World.
Tweet Post Submit