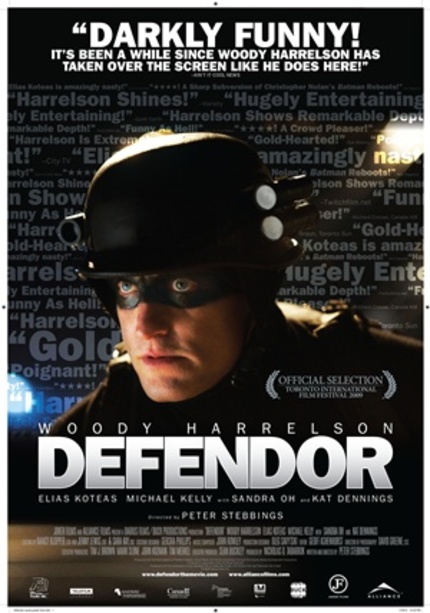 It's one of the best things Woody Harrelson has done in many years, it's hitting screens in Canada Friday and it's bringing a new trailer with it.  Hurray for superhero comedy Defendor!

Bruised and beaten, arm in a sling, neck in a brace, Arthur Poppington (Woody Harrelson) sits in front of court-appointed psychologist Ellen Park (Sandra Oh). After making her swear to secrecy, Poppington begins to tell the story of his secret life as "Defendor" - yes, that's an "OR" - spelling is not one of his super powers. By day, Poppington directs traffic around road construction sites, but at night he dons a pair of black tights, a black jersey with a crude "D" duct-taped to his chest, and trawls the streets as his alter ago. As Defendor, Poppington engages in what he believes is a super heroic fight against crime in an attempt to fulfill his unrealized dream of capturing his archrival, Captain Industry - a gun trafficking crime lord who Poppington mistakenly believes is responsible for the death of his mother.

Defendor's problems with the law begin with his intervention in a trick gone bad. When coming to the aid of Katerina Debrofkowitz (Kat Dennings), an underage prostitute, Defendor tangles with her pimp, Chuck Dooney (Elias Koteas) - a crooked undercover cop. By doing so, Defendor bumbles his way into a criminal underworld, and the stage is set for a showdown with Captain Industry