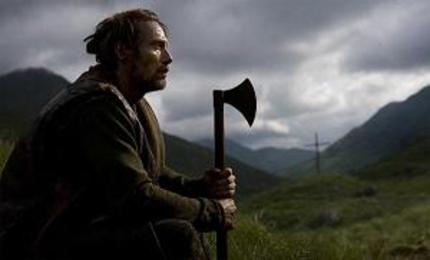 Nicolas Winding Refn seems to see Valhalla Rising as a tone poem of sorts, but the acclaimed Danish director's seventh feature film is more one long atonal scribble. A grim, brutally violent action drama about a Viking war party who accidentally stumble upon the New World a long time before Leif Ericsson carved himself a place in history, some impressive location shooting and a striking display of commitment to his role from star Mads Mikkelsen can't make up for a general lack of substance and a pervading air of seriousness so unrelenting it borders on farce.

Mikkelsen plays One-Eye, a fearsome warrior, mute and scarred, held captive by a mountain clan who employ his capacity for emotionless savagery in gladiatorial contests where One-Eye's jailers earn a steady stream of money off his ability to make sure his opponents leave the ring feet-first. When a chance opportunity leads to One-Eye escaping slavery, he joins up with a Christian warband looking to make a name for themselves in the Crusades, but a seemingly supernatural fog drives them a long, long way off course.

Refn is obviously out to imbue Valhalla Rising with elemental significance, from the stoic opening title cards to the immensity of the Scottish mountains that serve as a stand-in for some unnamed tract of Scandinavia. The thundering score makes it very clear there will be few, if any laughs coming. One-Eye is a force of nature in every sense, violent and implacable, his fighting to the death taking place in a sea of mud.

The problems start when it becomes apparent there's little or nothing to the film beyond this constant, oppressive struggle for survival. Nothing as in not simply a lack of complex plot development or convoluted back story and so forth, but the absence of any depth at all, whether conveyed by the characters or (despite what Refn seems to have intended) the landscape itself.

One-Eye is angry; he slaughters people; he says nothing. For all but maybe ten minutes of Mikkelsen's screen time this is all the viewer gets. The Danish star tries valiantly, and sells the physicality of the role seemingly without effort but other than that there's virtually nothing for him to communicate.

The other members of the cast fare no better - lacking in any real screen presence to a man, they haven't a prayer of doing anything convincing with the tissue-thin material they've been handed. Restricted to speaking English, they could be from anywhere across half of Europe - nothing here makes this specifically Norse beyond some offhand references to the spread of Christianity.

The absence of substance lends the whole production a stiff, forced theatricality, never more obvious than in the extended sequence confined to the longboat in the fog. What should be a tense, nail-biting stand-off along the lines of a bloodsoaked medieval take on Hitchcock's Lifeboat descends into nervous comedy. Flat, portentous line readings, a monotone colour palette and overbearing attempts to scare the audience silly prove equal parts tedious and farcical.

Next to a film like Tian Zhuangzhuang's The Horse Thief or Lu Chuan's Kekexili, Valhalla Rising has neither a real sense of place nor of any deeper meaning. Tian and Lu steep their windblown landscapes in a detached, otherworldly mysticism which is clearly feeding into the characters' motivations and continuing development on multiple levels, something plainly obvious even with the bare minimum of dialogue. Refn gives us nothing beyond this is a violent landscape where violent men kill each other violently, like some tourist guidebook to the inner circles of hell.

And in similar vein Terence Malick's The New World also contained its fair share of artistic indulgences, the director waiting hours for just the right balance of natural light, the tides, birds moving across a shot and all the rest of the rumours. But part of Malick's genius stemmed from his rock-steady understanding of pacing, the need to balance staring at the view with an explanation of context, the better to elicit an emotional response. The New World's expository monologues actually made Colin Farrell of all people a creditable philosopher-poet. Valhalla Rising barely has a shred of poetry in it, visual or lyrical, from start to finish. Refn presents us with hardly any reason to care about what's happening, let alone to be moved by it in any sense.

Valhalla Rising is hardly a bad film, clearly made by people with talent, and taken in isolation the different parts of it leave a lasting impression - hear the score separately, view individual stills or see the trailer and they seem to promise a great deal. But there's nothing here to meld those parts into any kind of convincing, compelling whole. The cast do nothing to push the audience to react one way or the other, the landscape just sits there, the violence provokes little more than nervous giggles, the whole enterprise doesn't seem to have much point. When other directors have gone over very similar ground and Refn does so little to set Valhalla Rising apart, much less do anything better, his film is very difficult to recommend.