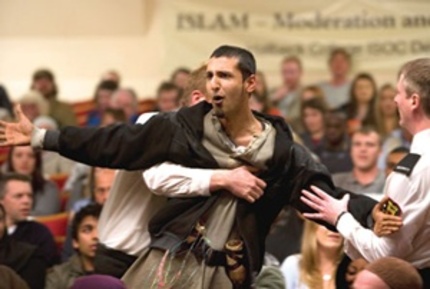 Terrorism-farce may not be too familiar to most moviegoers, but after director Chris Morris's quite funny Four Lions, he can confidently be called the genre's foremost auteur.  In a style similar to The Office, Morris brings us right along with our bumbling anti-heroes as they plan their glorious Jihad.  Those expecting a biting criticism of the War on Terror might find themselves a bit disappointed.  This is closer to Three Stooges than Three Kings.  But when the humor works, especially the hilarious physical scenes, it really kills.  The big surprise is that Morris is able to slip some pretty touching moments in the mix as well.

Omar (Riz Ahmed) is the leader of our modest suburban London terror cell - mostly due to the fact that he is the least idiotic.  When he and his best mate Waj (Kayvan Novak) head to Pakistan to attend (and terrorize) a terrorist training camp, Barry (Nigel Lindsay) sees an opportunity to take back some power and recruits jihadi hip-hop artist Hassan (Arsher Ali) into the cell.  With the help of the truly bumbling Fessal (Adeel Akhtar), the Lions stockpile enough bleach and other household goods to build their bombs.  Everything is set for their glorious jihad when Omar and Waj return from Pakistan.  The group just needs to decide on a target.  Possible targets include a mosque, a drug store, and the internet.   Whatever they decide, they all know it will be glorious - as long as they can manage not to blow themselves up before they... blow themselves up.

The plentiful physical humor is where Four Lions really shines.  Whether it is the guys furiously shaking their heads when they walk outside (anti-surveillance measures) or learning to run with their highly volatile explosives strapped on, these men are seriously funny to watch.  The written humor is a bit more hit and miss and you get the point that these guys are really, really stupid quite quickly.  But touches such as the Puffin Party internet forum where Omar convenes with his jihadi leader, ultimately win over.

For the most part, this is Omar's story.  The tiny bit of earnestness creeps through the absurdist exterior when he is forced to consider the impact of his suicidal zeal on his "special needs" pal Waj.  There are also some touching scenes with Omar and his wife - but one can't help but wonder why she is so cool with the whole plot.  Morris is wise not to delve too deeply into moral quandaries such as these.  It is just enough to round out Omar's character and make him sympathetic.  He is a suicide bomber after all.

Regardless of sobering subject matter, this movie does not take itself seriously.  Neither does it hold back.  Two great qualities for a film that aims to make you laugh so hard you'll explode.

[Ryland Aldrich is a screenwriter and freelance writer based in Los Angeles.  He blogs at enderzero.net]