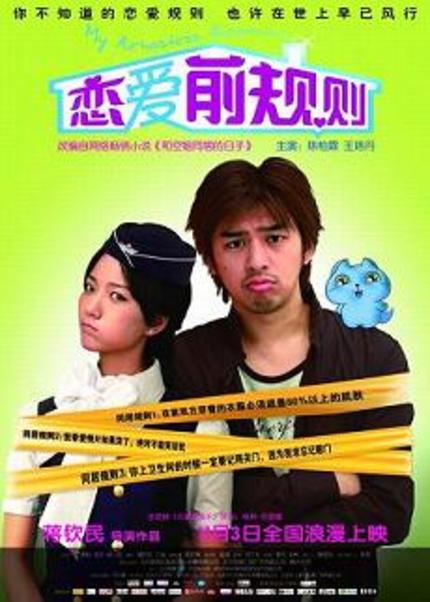 You might think it doesn't seem to rate much interest - a youth-oriented romcom adapted from a popular internet novel, helmed by a director who hasn't done anything outside China's domestic market in years. Still, despite being fairly undemanding product in the long run, Jiang Qinmin's My Airhostess Roommate has enough lightness of touch and a few moments of grace that it might charm more forgiving viewers with money to burn on the mainland DVD.

The setup is tried-and-tested odd-couple, where world-weary shut-in Lu Fei (Wilson Chen, Kung Fu Dunk, A Chinese Tall Story) takes in vivacious flight attendant Ran Jing (mainland TV actress Wang Luodan). Initially Lu Fei only means for her to spend the night on his couch recovering from a hangover, but Ran Jing keeps coming back, finally explaining she's just been turfed out by her landlord, she's got nowhere else to go and could she please, please move in with him?

Cue the same hijinks anyone who's seen more than a handful of romantic comedies ought to be more than familiar with, as Lu Fei abruptly has to deal with an actual real live human female in the house, with boundaries, a life of her own and very definite ideas regarding propriety and personal hygiene.

This is all set in the kind of blatantly aspirational fantasy-land well-trodden in movies the world over, let alone in Asia, for the past decade or so. Lu Fei has a job, sure - working as a game designer - but he doesn't seem to do nearly enough actual work to rate so lavish an apartment or such bleeding-edge gadgetry, let alone the toys littering every available surface. My Airhostess Roommate shoots for the kind of emotional pitch where chatting with your own multiple personalities is seen as quirky and endearing, rather than full-blown mental illness.

Yet ranked among recent Asian entries to the genre, Airhostess... may hardly be nuanced per se but it knows enough to dial things back (unlike, say, the awful Sophie's Revenge). The comedy here is largely fairly gentle stuff, and surprisingly Jiang opts for a very subdued colour palette tinged a colder, almost arthouse blue rather than a more conspicuous glossy sheen.

Since his debut in Blue Gate Crossing Wilson Chen has continually dabbled in slightly more experimental roles beyond his regular appearances in big-budget fluff - witness the under-rated anthology About Love, plus McDull: The Alumni and Waiting in the Dark. While he's no thespian he has the presence and enough of a gift to lend a nothing role like Lu Fei some measure of pathos. Ran Jing veers close to flower vase territory, but Wang Luodan manages to give her enough self-esteem to make an impression, plus she's pretty and winning enough as an object of (largely chaste) affection.

The script is relatively balanced, too, and refreshingly non-judgemental - there's little depth here but neither party is cast as entirely black or white, nor do either of them end up 'normal'. The ending may appeal to urban Chinese dreams of upward mobility and their country's relentless modernisation, but in some respects it's an unexpectedly muted climax, and (just!) thoughtful enough to sidestep stereotypical 'pure love' resolutions.

It helps, too, that as a designer Lu Fei's work proves quite enchanting. Wilson Chen seems quite comfortable in that aspect of the role - he played a struggling animator in his segment of About Love - and the rotund little feline he's supposedly working on is appealing enough it's easy to imagine many viewers wishing they could see more of him.

It bears noting, however, that dialing things back doesn't necessarily equate to subtlety. Airhostess...' main problem is for all its craft it's still fairly thin. There's no peril here, no pain - Wilson Chen avoids chewing the scenery but at the same time he can't really give the part any sense of actual life or urgency. Come the expected third act conflict he looks more vaguely upset than torn up inside. Coupled with the general disconnection from reality it's hard to connect with these people to any great degree.

My Airhostess Roommate is by no means a bad film, but for all its little flourishes it's product to a fault, likely to prove relatively forgettable for anyone beyond its target demographic. Anyone after some inoffensive cinematic comfort food could do far worse - it's competently put together, funny and charming - but while it rates as slightly above average there's little if anything truly special about it.

Do you feel this content is inappropriate or infringes upon your rights? Click here to report it, or see our DMCA policy.
Jiang Qin MinBo-lin ChenJuan DuLuodan WangCica ZhouComedyRomance