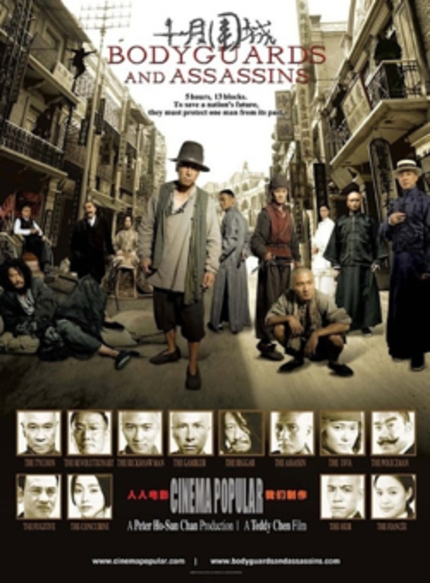 Those expecting a period action epic in a similar vein to last year's IP MAN may be left wanting by Teddy Chen's BODYGUARDS AND ASSASSINS. Where Wilson Yip's film happily traded historical accuracy for fighting opportunities, Chen has chosen the opposite approach. The director takes his time to develop characters, position them carefully within a clear historical context and fully explore their relationship to each other and personal politics, before letting them off the leash to wreak bloody carnage.

Audiences teased by footage of Donnie Yen doing parkour through a crowded marketplace and unleashing holy hell on Le Cung have a long wait ahead of them. Only once outspoken revolutionary and assassination target Dr. Sun Yat Sen arrives in Hong Kong, a good hour into the film, does the action really begin. When it does, however, it does so in spades. The second half of the film unfolds more or less in real time and basically consists of one long chase/scuffle through the centre of turn-of-the-century Hong Kong. The Resistance must protect Dr. Sun from Quo (Hu Jun) and his Qing assassins, so he can meet with the leaders of the 13 rebel factions and plot the uprising that will bring about the end of the Qing Dynasty.

For the first half at least, Donnie Yen's Shen is very much a peripheral figure - a compulsive gambler with outstanding debts and exceedingly loose morals, happy to sell out anyone else if there's a quick buck in it for him. It is not until he is approached by old flame, the now Mrs. Li (Fan Bing Bing), and asked to watch over her husband during their mission that he really takes to the stage.

The true dramatic anchor of the film is Li, brilliantly played by Wang Xueqi.  He starts the film as a successful businessman with little or no political agenda, but is drawn into the Resistance by his friend Chen (Tony Leung Ka Fai) and the involvement of his beloved son (Wang Bo Chieh), and eventually becomes a reluctant hero and the driving force of the operation.

Li recruits a ramshackle mob of "unsung heroes" to aid their mission, including his loyal rickshaw driver, A-Si (Nicholas Tse), whom Li vouches for when he proposes to a local girl. Chow Tofu (Mengke Bateer) is a giant, lumbering shaolin monk, who gladly puts himself forward to guard the convoy on its treacherous journey, and precocious young Fang Hong (Li Yuchun), the daughter of General Fang (Simon Yam), Dr. Sun's intended protector, who is brutally slaughtered with his men by the Qing forces days before the Doctor has even arrived.

Not only do Li and Chen have to contend with an encroaching army of invisible assassins, led by Quo (played with suitable menace by bad-guy du jour Hu Jun), but also Eric Zhang's interfering "puppet" police chief Shi, who is ordered to quell the riots by his British superiors, only to be instructed to turn a blind eye to the assassination attempts.

The problem with an ensemble piece like this is ensuring that enough screen time is given to each character and while Chen does a valiant job of making us understand and care about a good dozen or so different people, one or two do slip through the cracks.

This is most true in the case of Leon Lai's beggar, Liu. A washed-up warrior pining after a dead lover (a briefly glimpsed Michelle Reis), he is barely featured at all until he is called upon very late into proceedings to shave his beard and take on a whole legion of assassins single-handed. Lai's moment in the sun raised unintentional titters from the audience, not it seems for his performance or the direction, but simply because it's Leon and he simply fails to convince as a world-weary, lovelorn badass.

Hong Kong, circa 1906, is fantastically recreated on screen, thanks to a combination of vast outdoor sets seamlessly complimented by CGI landscapes. And it is here where the influence and involvement of producer Peter Chan Ho Sun can be most acutely felt. BODYGUARDS AND ASSASSINS boasts lavish production values, bringing a much-needed authenticity to the proceedings that director Chen effectively capitalizes on to build atmosphere, tension and an intricate web of characters.

Suffice to say that the film is more of a political drama than is perhaps hinted at in the film's marketing, but an engrossing and highly effective one. The context of this turbulent and volatile period of Chinese history is carefully executed and Chen ensures the drama is always placed ahead of any particular political agenda. And ultimately it is all for the audience's benefit. The second half is a tense and riveting piece of action cinema featuring some impressive fight sequences and numerous wince-inducing moments of bone-crushing violence, certainly worthy of the foundations so deliberately laid before it.