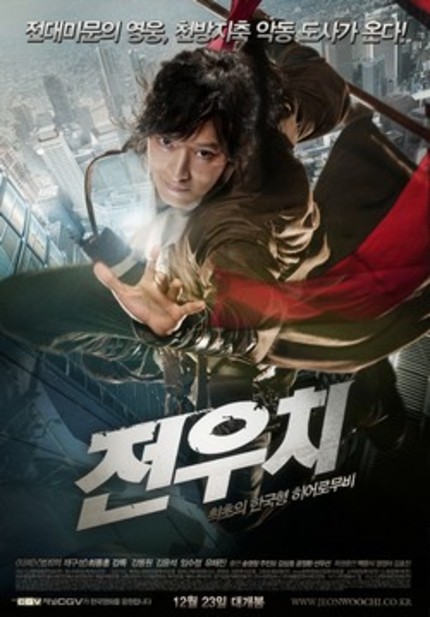 OK... I know you're heading straight for that play button, but if you want to avoid being scarred for life by listless teenybopper crap surrounding those fine visuals, I advise you turn off your speakers. Or put copious amounts of stucco in your ears. Now I know that music moguls are invading the entire Korean entertainment industry with their talentless starlets, but does anyone remotely involved with Choi Dong-Hoon's 전우치 (Woochi) really think that this kind of song fits with the visuals they're serving here?

Anyhow, I digress. The other news, which is really nothing new but I refused to believe it until it became official, is that... yes, it seems like they're indeed calling it Woochi. Not Jeon Woo Chi: The Taoist Wizard, or some variation on the theme, just that. And that is fine, for Korean audiences or anyone familiar with the figure, but thanks to the wonders of Korean romanization, anyone approaching this film without any background knowledge might be led to believe it's about stuffed teddy bears, a kimchified version of Winnie the Pooh or something. But those are all minutiae, what's important is that Choi's SF action comedy looks like metric tons of fun (although I'd still say that the wirefu looks iffy), and is filled with one of the best casts of recent memory, from big players like Kim Yoon-Seok and Im Soo-Jung down to the finer details, like Song Young-Chang and Kim Sang-Ho. Oh, it has Kang Dong-Won, too.

Woochi is releasing on December 23, and judging by the buzz surrounding it, we might have another huge hit on our hands. Which only means it'll take longer to see this make it to DVD and theaters abroad, but what can you do. Now take a look at the freshly released MV, but don't say I haven't warned you...

Do you feel this content is inappropriate or infringes upon your rights? Click here to report it, or see our DMCA policy.
Dong-hoon ChoiYun-seok KimSu-jeong LimDong-won KangJung-ah YumActionAdventureComedy