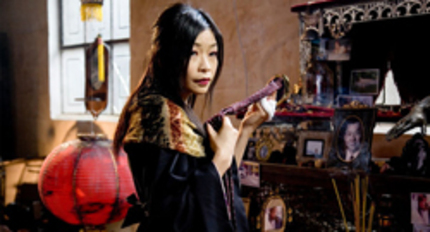 The heroine, Sheri, is a young Chinese Canadian who, despite her mother's obsessive fear of anything "dirty," secretly works in a fetish parlor. One day, she comes across a strange woman, Celeste, going through her trash. Disturbed by what the woman says to her, Sheri asks more questions and discovers the illicit affair of her father, Wooie, and the 10-year-old curse on her family.

Independent and local filmmaker Keith Lock worked together with sex columnist/poet Louise Bak to bring a script inspired by Chinese folklore and Bak's own family history. As Sheri's father wrestles with his passion for Celeste and his duty to care for his family he tries to distance himself from her. Of course this does not bode well with Celeste so she starts cursing Wooie, his business and family, even Sheri's friend Cosmo. What unfolds in the film is scene after scene of stale dialogue and stifled delivery that feels arguably longer than its run time. Pity.
Dialogue and delivery are key concerns here as nearly everyone speaks the same, with a singular voice and tone. There is very little identity in speech. The only real standout may be Jo Chim's character Celeste but that can be due to the fact that she is a trapped fox spirit. There is an expectation there. But the other characters are rather flat and dull and when they are the people we are meant to care about and you cannot attach yourself to them or understand their quandary then something is amiss.

There is some weird character development going on as well. Sheri's mother is OCD, constantly cleaning the house and admonishing even the simplest things like pens and mahjong tiles falling on ground. But then she seems to have no problem using a public phone at a restaurant or helping shuffle mahjong tiles despite her condition. I understand that Sheri's fetish client Wayne is meant to serve as comedic relief along with her friend Cosmo but when so much time is spent in the first half of the film investing in Wayne's character and he is dumped mercilessly and never heard from again all you can do is scratch your head and wonder what was the point.

I suppose The Ache is to be some story about everyone being dirty or damaged and no matter how hard we may try we may never be truly cleansed. Out damned spot. Out I say! I really wanted this to be better. I really wanted to uplift a local filmmaker. But the end result is rather dull and at times even laughable. Again, pity.