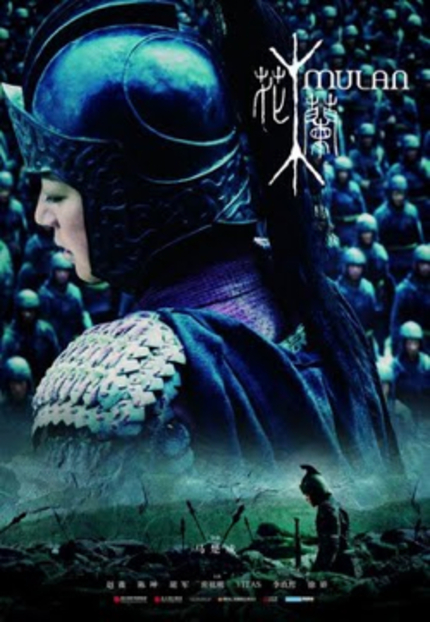 The story of Mulan has always struggled to gain plausibility. The fact that a young woman could not only pass herself off as a man, but rise through the ranks of the Chinese armed forces to become one of its highest ranking generals without so much as a sniff of suspicion from the hundreds of thousands of troops she commanded, let alone her superior officers, is quite the pill to swallow. Regardless of how constantly covered in grime she was, how tomboyish she behaved, or just plain ugly she may have been, it is an achievement of almost unfathomable magnitude. When you have an actress like Zhao Wei portraying Mulan, a woman of no modest beauty, despite the hair & make-up department's best efforts to disguise it, the situation becomes almost impossible to conceive. However, that is the premise of the tale.

After her terminally ill father is called to arms to defend the Wei nation against the invading Rouran forces, his dutiful daughter Mulan (Zhao) swipes his armour and sets off in his place, where her prowess in combat and tactics quickly shine through. She is able to keep her true gender a secret with the help of her childhood friend Tiger (Jaycee Chan) and although she is exposed early on while taking her first, and presumably last, bath by an officer, Wentai (Chen Kun), he agrees to protect her secret. Together, Wentai and Mulan are promoted to generals and eventually lead the Wei forces, until a serious of poor judgements by Mulan, which she attributes to her growing feelings for Wentai, cause multiple casualties among her troops and she is forced to reconsider her entire situation.

In a climate already littered with countless period war films, Jingle Ma's MULAN falls squarely into the pile marked unremarkable and unnecessary. Too often it ignores opportunities for genuine drama and rarely displays any kind of visual style that this kind of production demands. It is staggering to think that during the twelve years in which Mulan served in the military masquerading as a man, she was never found out, never exposed, or even assaulted by the men constantly surrounding her. Exactly how she managed to keep herself, quite literally, under wraps for so long is never adequately explored and the overwhelming sentiment is that the writers don't really care.

The forbidden romance between Mulan and Wentai is given a little more exposure, but once it is established that they can never consummate their relationship, it quickly runs out of steam. When the narrative does present opportunities - like when Wentai must treat Mulan's wounds after a battle - this could have been a crushingly sensual moment as she disrobed and he was forced to touch her flesh and dress her wounds with the utmost restraint - but Ma, it seems, would rather get back to his generic desert-set battle sequences, filmed completely without flourish or excitement, than attempt a moment of genuine passion and heartache.

It is a great shame that the film ultimately seems so disinterested in its protagonist. Zhao brings some class and genuine weight to the emotional side of Mulan that stretches beyond the poorly realized script, although even she fails to fully convince as Mulan the warrior. Chen Kun and Jaycee Chan put in notable performances as the two men burdened by Mulan's secret, but devoted to protecting it and there's much scenery chewing from Hu Jun as Wendu, the ruthless Rouran general determined to slaughter every last Wei soldier he finds. There is also a completely unnecessary cameo by Russian pop star Vitas, in a role that does nothing more than provoke the question "who are you and what are you doing in this movie?"

Mainland Chinese Cinema is one of the few industries where the women, onscreen at least, genuinely command more power than their male rivals and one would assume that such an iconic role as Mulan would be served appropriately. What we get here, however, is a film devoid of passion, whose message, rather than supporting a woman's ability to do a man's job, is more interested in preaching the importance of individual sacrifice for the "greater good" yet again. Mulan's identity, suffering, sacrifice and achievements as both a woman and a military tactician are barely acknowledged and the film quickly becomes just another war film, lacking any discernible sense of scope, drama or importance. And there isn't a talking dragon to be seen anywhere.