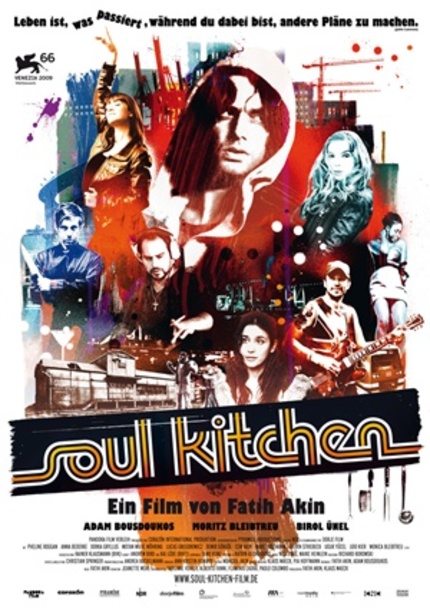 Turko-German director Fatih Akin must surely be one of the most diverse talents currently working in Germany.  He blew our minds with the hard edged, cathartic drama of Head On before moving on to the fabulous music doc Crossing the Bridge and now returns to the kind of light comedy where he began his career with Soul Kitchen.  Find me another director with three more different films packed so tightly into their resume and I'll eat my shirt.  Here's how the Toronto International Film Festival described Akin's latest when it screened there:

Zinos Kazantzakis (Adam Bousdoukos) runs Soul Kitchen, a vast warehouse diner where the food might be spectacularly bad, but it's edible. Regulars show up every day to chow down on bland lumps of carbs washed down by cheap beer. Beats sitting at home.

Zinos seems to have a knack for bad luck, but he's used to it. His girlfriend flies off to China for an extended stay. His brother (Moritz Bleibtreu) finally gets out of jail and drags all of Hamburg's trouble into the restaurant. Then the sour-faced tax collector shows up. What would happen if Zinos went looking for the city's biggest rock-star chef (the ferocious Birol Ünel from Head-On) in a bid to save his restaurant and shake things up?

Akin sets his story in motion and lets the players dance, fuelled by a sweet, thumping soundtrack of great soul music. The chef whips up wonders from the most humble ingredients, shocking the regulars and seducing a whole new clientele. And once he slips some Peruvian tree-bark aphrodisiac into the dessert, everything changes. A full-on bacchanalian party breaks out, and that tax collector turns out to be a lot more flexible with receipts than she first appeared.

Soul Kitchen is casually cool and loads of fun to watch. By the time the inimitable Udo Kier shows up, villainously chomping on dinner mints, you know this movie's heart is in the right place. Backside, too.

The first trailer for this one has just arrived, check it out below.