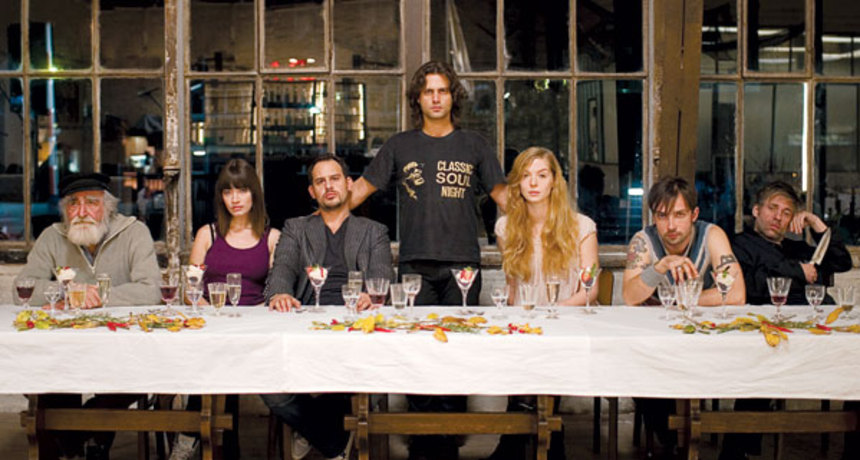 Piling on pratfalls, meet-cutes, wacky neighbors, montage sequences and an abundance of 'Fox Searchlight'-isms (think of the plots and tone of films from that company: The Full Monty, Saving Grace, Juno) and the old stand by of good food equating to good sex, Akin does not reinvent the wheel, but he does deliver one of the better comedies stuffed to bursting with living-in-the-margins characters. When all of the elements come together this well, it is hard not to surrender to the pleasure of a simple yet well-made dish (Ratatouille if you will).

Zinos is having a bad day. He owes the tax-lady a whack of cash, his girlfriend is leaving him for a journalism career in China, and his gambling prone criminal brother is just getting out of jail. To top it off, his dishwasher dies and moving in the new one, he threw out his back, badly, and has no medical coverage (or cash) to even see what is wrong. Who is going to cook the frozen fish-sticks and wiener schnitzel that pay the bills by giving his restaurants few clientel something to munch alongside their beer. Amongst the wreckage of his current situation he is given a godsend, one of the best chefs in town, played ferociously by Head Ons protagonist Biron Unel, is fired at the very moment he is at his girlfriends farewell dinner at a fancy restaurant. The chef is one of those John Cleese (or Tony Shaloub in Big Night) type crazies that freak out if a customer wants extra salt or pepper added to the food. He is the best kind of chef, a fascist and a perfectionist that will not on principle fill his customers bellies "full of shit." And once given the guarantee that Zinos will not get in his way (with a set budget) he sets out to have Soul Kitchen live up to its name.

The result is a ferocious comedy of cuisine, clientèle and coitus. The chef has a penchant for throwing a tree bark from Honduras, a powerful aphrodisiac, into the dessert which gets the new folks from the dance-studio up the street into some R-rated aperitif-antics. With the restaurant getting back on its feet, he still has the girlfriend, paroled brother (always nice to see Moritz Bleibtraeu shining as a charismatic criminal - see also The Baader Meinhof Complex). Add in a local developer who wants the site of the restaurant for development and Zinos just cant seem to balance life with that bad back. Oh and Udo Kier slinks into the picture as a dinner-mint munching Bond villain (come to think of that, why has Kier never been a Bond Villain?) that will simply leaving you choking. Coming out of the film after 40 plus tiff screenings and no sleep, its hard not to laud the delights of Soul Kitchen with quotable blurbs, and I hope this allow for the rare subtitled comedy to play in North America.

Part foodie extravaganza, part sit-com, part feel good dramedy (and even a bit of toe tapping due to its Motown soundtrack), Soul Kitchen hits the spot in a five-star kind of way.